Keeping Li-Ion Batteries from Fading Away 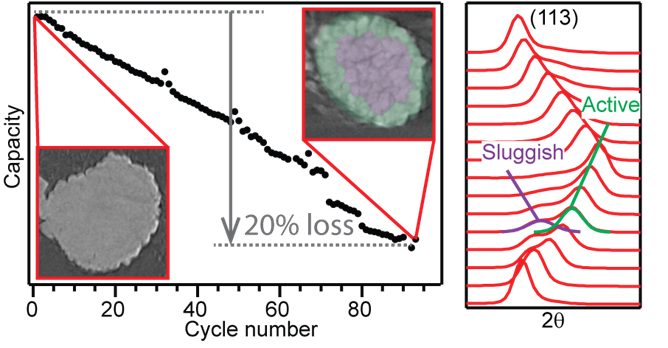 The rechargeable lithium-ion batteries in our smartphones, laptops, and various other personal electronic devices make them completely portable, allowing us to unplug so long as the batteries are charged.  But rechargeable batteries don't last forever, and the more times they're recharged, the less energy they store.  The question is: Why? A team of researchers utilized x-ray beams from two U.S. Department of Energy (DOE) Office of Science national user facilities to reveal a major cause of charging capacity fading in Li-ion batteries: inter-granular cracking in the interface between the electrode granules. Their work was published in Nano Letters.

Rechargeable battery performance always involves a compromise between charge capacity and lifetime:  a higher initial charge capacity usually results in a more rapid fade in capacity.  By limiting the capacity of currently available Li-ion batteries to only about 70% of their theoretical potential capacity, we can ensure they retain their capacity for longer.  Studying the processes that lead to this capacity fade provides a roadmap to mitigate performance loss and to increase battery efficiency and lifetimes.

But such work is complicated by the challenge in extrapolating from a few days of laboratory studies to the many months over which capacity fades under normal operating conditions.

In studying an NCA electrode through more than 90 charge-discharge cycles, the researchers saw that capacity fade was solely due to the part of the electrode in which the charge lagged behind the rest of the electrode and never fully recharged.  As revealed by tomography studies carried out by this group at the DOE’s Stanford Synchrotron Radiation Lightsource, this sluggish charging is linked to the formation of inter-granular cracking at particle boundaries, which degrades connectivity and increases impedance, leading to the slower charging.

Cycling the electrode at 14 mA/g from 2.7 to 4.5 volts, the team found a 20% drop in discharge capacity from the first to the 93rd cycle, with no significant change in the atomic structure of the NCA, but a change in the charge-discharge process.

Operando XRD conducted during the 92nd and 93rd cycles revealed the development of two separate Li populations, one with a charge-discharge response similar to pristine NCA and a second with a more sluggish response.  This divergence in Li composition appears only after extended cycling.

Such heterogeneous Li distribution, causing loss of conductivity between NCA particles and degradation of charge capacity, results from the formation of cracks at the boundaries of primary particles.  The inter-granular cracking occurs because the primary particles expand and contract as Li goes in and out during charge and discharge.  This difference in the expansion and contraction at the interface between particles causes them to break apart in a process analogous to thermal fatigue in ceramics.

By reducing the surface area available for electronic transport between neighboring particles, this cracking increases impedance and, thus, compromises electronic conductance at a microstructural level.

The researchers found that other known causes for battery capacity fading, particularly the formation of Ni-rich compounds at particle surfaces after repeated cycling, play a lesser role in the observed capacity fading.  They distinguished chemical from mechanical factors in capacity fading by cycling NCA electrodes to the same upper cut-off voltage (4.5 V) but different lower cut-off voltages (4.25, 4.05, and 2.5 V), comparing effects on the NCA lattice.  The electrodes subjected to broader cycling ranges displayed markedly lower capacity than those undergoing a narrower voltage range, indicating that the mechanical phenomenon of cracking was more significant to capacity loss than chemical changes.

The research team notes that while previous studies generally used accelerated cycling rates, which can induce inter-granular cracking and capacity loss for different reasons, the present study was conducted solely at slow rates over a normal operating period of approximately three months.  This indicates that the inter-granular cracking observed here is an inevitable result of the cycling of commercially-available Li-ion batteries.  Lower cycling rates may preserve capacity for somewhat longer periods, but ultimately the significant loss of capacity is unavoidable.

The confirmation of the primary cause of capacity fading identified in this work also points to possible solutions, or at least mitigation of the effect.  The experimenters suggest several possible approaches, including eliminating secondary particles in the aggregate structure, limiting their size, or coating them, as well as optimizing voltage ranges to ensure minimal lattice structural changes.  While immortal batteries may never be possible, understanding the phenomena that lead to their fading and ultimate failure is the first step in extending their lifetimes and utility.  — Mark Wolverton