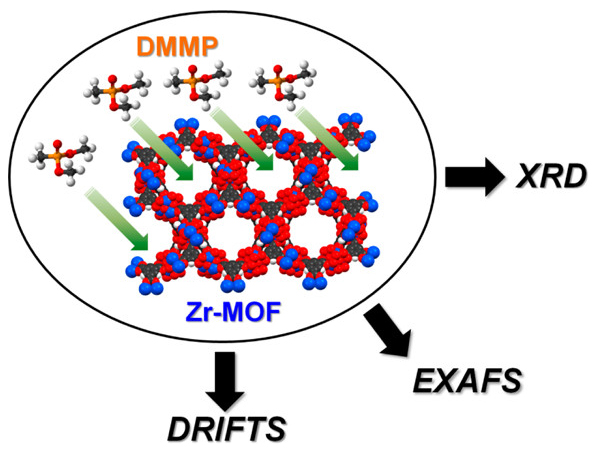 Chemical warfare agents that could be deployed against both soldiers and civilians have been a grave concern since World War I, when they were first used. Research on methods to defeat these weapons has been a focus of scientists since that time. Now, a multi-institution collaboration of scientists from U.S. federal research institutions and U.S. universities is studying how the use of zirconium (Zr)-based metal organic frameworks (MOFs) and niobium (Nb)-based polyoxometalates (POMs) may be effectively used in gas masks to capture and decompose dangerous chemical agents like Sarin, notably used in a subway terrorist attack in Japan in 1995. The research team employed four U.S. Department of Energy (DOE) Office of Science synchrotron x-ray user facilities, including Brookhaven National Laboratory’s National Synchrotron Light Source (NSLS) and its successor, NSLS-II; Argonne National Laboratory’s Advanced Photon Source (APS); and the Stanford Synchrotron Radiation Lightsource (SSRL) at the SLAC National Accelerator Laboratory.

Both investigations were carried out by collaborative teams led by Anatoly Frenkel, a joint appointee in Brookhaven Lab’s Chemistry Division and the Materials Science and Chemical Engineering Department at Stony Brook University. In addition to Brookhaven and Stony Brook, the team also comprised researchers from Virginia Tech, the U.S. Army Edgewood Chemical Biological Center APG, Emory University, and Columbia University. They used the NSLS, the NSLS-II, the SSRL, and the APS to conduct probes on how the MOFs and POMs interact with dimethyl methyl-phosphonate (DMMP), a low-toxicity simulant of Sarin.

“As shown in previous studies—notably by the groups of J. Hupp and O. Farha in Nature Materials (2015) 14, 512—MOFs can be effective for the degradation of nerve agents and their simulants,” said Frenkel. “Our team developed an in situ, multimodal approach — using synchrotron diffraction and absorption facilities — that allowed us to investigate the uptake of the simulant into the MOF pores and the simulant decomposition by the MOF. In the case of POMs, we uncovered the mechanism of DMMP decomposition and the specific roles of niobium-oxygen bonds for this process.”

The MOF is somewhat like a sponge that not only uptakes DMMP but also decomposes it and keeps it from reentering the airstream. In the case of POMs, the polyoxoniobate also breaks down the DMMP, but the products of decomposition remain strongly bound to the POMs. Frenkel says this research highlights the need for new approaches that address product inhibition, and may lead to innovations in the new design of protective materials for gas masks.

“Three years ago, a group of scientists got together and decided to investigate the mechanisms of filtration at a new level of detail — at the level of single atoms and molecules — and this is where Brookhaven’s facilities were uniquely useful,” Frenkel said. “We have the ability to study the geometric structural environment of atoms and molecules at a broad range of scales and times. And we can do it under conditions similar to those in which these filtration materials operate.”

"Such a complex problem requires a highly interdisciplinary approach to the science," said John Morris, a professor of chemistry at Virginia Tech, a surface scientist and lead principal investigator on the grant that supports this work.

This interdisciplinary approach is evident in both papers. MOFs are a novel class of materials with a very porous structure and a large surface area that enables them to act as sponges, taking in chemicals or any ambient molecules from the airstream. Prior research showed that zirconium oxides had enhanced adsorption qualities and the ability to bind chemicals, so it was chosen as the main element. Four different MOFs were tested, each with different structural details that would allow researchers to better understand which might make a good filtration material. Differences included pore size and number of connections.

Since Brookhaven Lab is not designed for handling real chemical warfare agents, the researchers used DMMP, a simulant that imitates Sarin’s chemical properties but without its biological toxicity, allowing it to be used safely in laboratory studies on the action of filtration materials.

Anna Plonka, a member of Frenkel’s group and the first author in the first paper, used the XPD beamline at the NSLS-II and the X-ray Science Division 17-BM-B beamline at the APS to conduct x-ray diffraction measurements. Those measurements provided evidence that DMMP entered the MOF, but the method did not have sufficient sensitivity to investigate the decomposition of DMMP.

“Using diffraction beamlines at APS and NSLS-II, we were able to answer two questions: First, did DMMP molecules enter MOFs or not?” Frenkel said. “By comparing the diffraction data before and after the MOFs were exposed to DMMP, we could see that the pore size increased after the exposure, but it was not direct evidence that DMMP entered the pores. So we asked the second question: Can we capture the image of DMMP molecules inside the pores—in other words, catching it red-handed?”

For that, the scientists used a technique called a Difference Density Map, which showed the crystallographic structure of the MOF with evidence of foreign objects inside.

“What we see using this method is, so to speak, ‘shadows’ of DMMP, signaling that it is inside the MOFs,” said Frenkel. “Furthermore, we noticed that the DMMP shadows were present near zirconium clusters. That fact, along with our knowledge that zirconium species may be catalytically active, pointed towards a possibility that the DMMP decomposition occurred as a result of interaction with Zr clusters.”

To verify this hypothesis, the scientists analyzed the local structure around zirconium atoms during the exposure of the MOFs to DMMP. For that they used extended x-ray absorption fine structure (EXAFS), a spectroscopy technique that is sensitive to very small scales of distance around each atomic species that absorb x-rays. This work, performed at SSRL, demonstrated that the Zr environment was perturbed when DMMP was added to the reaction volume, thus confirming the hypothesis. Overall, the research shows the important role of both the MOF porosity and the Zr centers in adsorbing and binding the DMMP, and provides guidance for the design of improved filtration materials based on MOF structures.

The second article, describing POMs, follows a similar approach – a combination of in situ EXAFS, in situ Raman spectroscopy, and calculations by Density Functional Theory. The EXAFS and Raman experiments were performed by Qi Wang, a scientist in Frenkel’s group and the first author in the paper. The EXAFS experiments were performed at the SSRL beamline 2–2 and the XSD beamline 9-BM-B,C at the APS. In situ powder x-ray diffraction measurements were conducted at the XSD beamline 17-BM-B at the APS.

Both projects involved collaboration with synthetic chemists in the Craig Hill group at Emory University, and Wesley Gordon and Alex Balboa, scientists at the U.S. Army’s Edgewood Chemical and Biological Center in Aberdeen, Maryland. Brookhaven chemist Sanjaya Senanayake and Nebojsa Marinkovic, a staff scientist at the Synchrotron Catalysis Consortium, also contributed to the in situ studies. In addition, collaboration with computational chemists at Virginia Tech, led by Diego Troya, provided insights on the molecular interactions with the MOF and POM materials.

“Obtaining atomic-level insight of any catalytic process is extremely challenging because changes occur very quickly and structural transformations during the reaction are very subtle,” said Troya. “The accuracy of current computational-chemistry approaches to catalysis is reasonable, but requires use of models that need careful calibration. The measurements performed at Brookhaven provided a unique set of experimental data with which the validity of the computational models for nerve-agent decomposition on POMs could be tested. From the synergy between the simulations and the measurements, the atom-level hydrolysis mechanism of toxic nerve agents with POMs was revealed for the first time. The mechanism describes not only the transformation of the nerve agent during reaction, but also structural and electronic changes to the few atoms of the catalyst that directly participate in the reaction.”

The interdisciplinary team also includes experts in infrared spectroscopy in the Mark Mitchell group at Kennesaw State University, and computational chemists at Emory University, led by Djamaladdin (Jamal) Musaev. They provided important insights on the molecular interactions with the MOF and POM materials. Together, the team is advancing the understanding of the use of MOFs and POMs in detoxification of gases.

This work is supported by the U.S. Army Research Laboratory and the U.S. Army Research Office under Grant No. W911NF- 15-2-0107. The authors thank the Defense Threat Reduction Agency for support under program BB11PHM156. Use of Advanced Photon Source, Stanford Synchrotron Radiation Lightsource, and National Synchrotron Light Source II was supported by the U.S. DOE Office of Science under Contracts No. DE-AC02-06CH11357, DE-AC02-76SF00515, and DESC0012704, respectively. In situ operations at the BL2-2 beamline at SLAC were made possible by the U.S. Department of Energy Grant No. DE-SC0012335.