Straining is Better for Catalytic Reactions 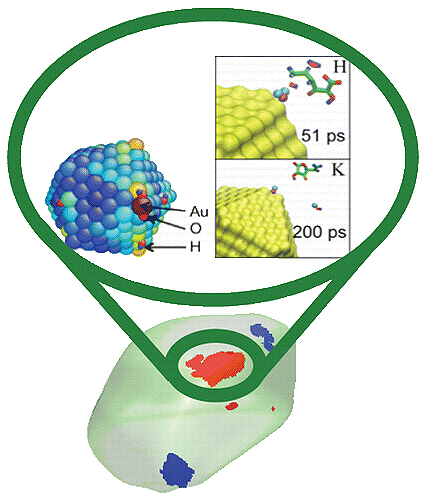 Catalysts speed chemical reactions without undergoing change themselves. Reactions that might have been too slow to be worthwhile on their own often become economically attractive once a catalyst is added; they’re essential to the fast, efficient operations of oil refineries and industrial chemical manufacturing. Most catalysts work by providing a favorable spot for a reaction to take place. They may bring the two reactants closer together in the correct orientation, polarize a bond making it more likely to break, or form intermediate chemical species that would not otherwise form naturally. Catalysts often include precious metals such as gold and platinum. Because the activity of a catalyst depends on its surface area, industrial processes already maximize the surface area to reduce the amount of catalyst necessary to shepherd the reaction. To make the process any better, other methods will be needed. Using several techniques, including Bragg coherent diffractive imaging and computer modeling at the nanoscale, researchers using the U.S. Department of Energy’s Advanced Photon Source (APS) and the Center for Nanoscale Materials, both at Argonne National Laboratory, took an atomic-level look at how reactions strain the surface of gold nanoparticles acting as catalysts in the decomposition of ascorbic acid (Vitamin C). This is the first step in understanding how strain—deformation of the normal pattern of atoms—on the surface of a catalyst could make it better at facilitating chemical reactions.

Gold is a common catalyst, often used in catalytic combustion of fuels, removing noxious hydrogen sulfide and sulfur dioxide from more useful gases, and speeding oxidation in many different reactions. It also has properties similar to heavy metals that can poison biological systems by, for example, interfering with ascorbic acid, but is generally safe to work with. Gold is also very stable and electron-dense, so it reflects x-rays well and made a good system with which to study a new phenomenon.

The team of researchers from the University of California, San Diego, Argonne, the SLAC National Accelerator Laboratory, the Deutsches Elektronensynchrotron (Germany) and the University of Melbourne obtained three-dimensional (3-D) images of gold nanoparticles in the process of catalyzing ascorbic acid decomposition. They used Bragg coherent diffractive imaging at the X-ray Science Division 34-ID-C x-ray beamline at the APS, which is an Office of Science user facility. 34-ID-C is the only beamline at APS specifically designed for Bragg coherent diffractive imaging. The x-ray source is tens of meters distant from the detector, and the line has very bright x-rays that are exactly in phase with each other (coherent). The researchers mixed gold nanoparticles with ascorbic acid and took measurements for more than an hour, starting before the reaction began and running until after it was over.

From this data, they constructed the first detailed 3-D pictures of the strain a gold particle goes through during a chemical reaction on its surface.

But the researchers could only see the gold, not the ascorbic acid, using x-rays during the reaction. They needed another piece of data to understand what was actually happening to the ascorbic acid at the strained sites on the gold. So they compared their data with simulations run by researchers at Argonne’s Center for Nanoscale Materials. The simulations let them identify exactly what the ascorbic acid was doing when the gold was strained in a specific configuration, down to 10-nm resolution. From that data, the researchers could start to guess which strains facilitated the decomposition reaction.

Because the strain corresponds to the position of atoms on the gold surface, and because gold catalyzes reactions by putting chemicals in a good position to react, it might be possible to enhance gold’s catalytic activity by changing how it is strained. That might increase the number of spots on the gold’s surface favorable to reactions, or even show chemists how to encourage certain reactions and discourage others.

The researchers say the next step would be to look at many different crystals, both of gold and other catalysts, to better understand how strain states affect catalysis.