The Twisted Liaison Between Magnetism and Superconductivity

In various materials that show unusual forms of superconductivity, including the rare earth cuprates, heavy electron metals, and iron based pnictides, superconductivity typically emerges from a magnetically ordered state. Despite more than three decades of research, however, the precise mechanism by which superconductivity takes hold remains unclear for all these systems. By means of magnetic x-ray diffraction studies at the U.S. Department of Energy’s Advanced Photon Source (APS), an Office of Science user facility, researchers have investigated the magnetic characteristics of a helical spin-order phase preceding a recently discovered pressure-induced superconducting phase in manganese phosphide (MnP). The work suggests that electron pairing in the superconducting states could be triggered by spin fluctuations of helical character (Fig. 1), retained from the adjacent ordered state. Furthermore, MnP and related transition metal compounds form a family of model systems for exploring the interaction between magnetic and superconducting states with spin character of a helical form. Their work was published in Nature Communications. 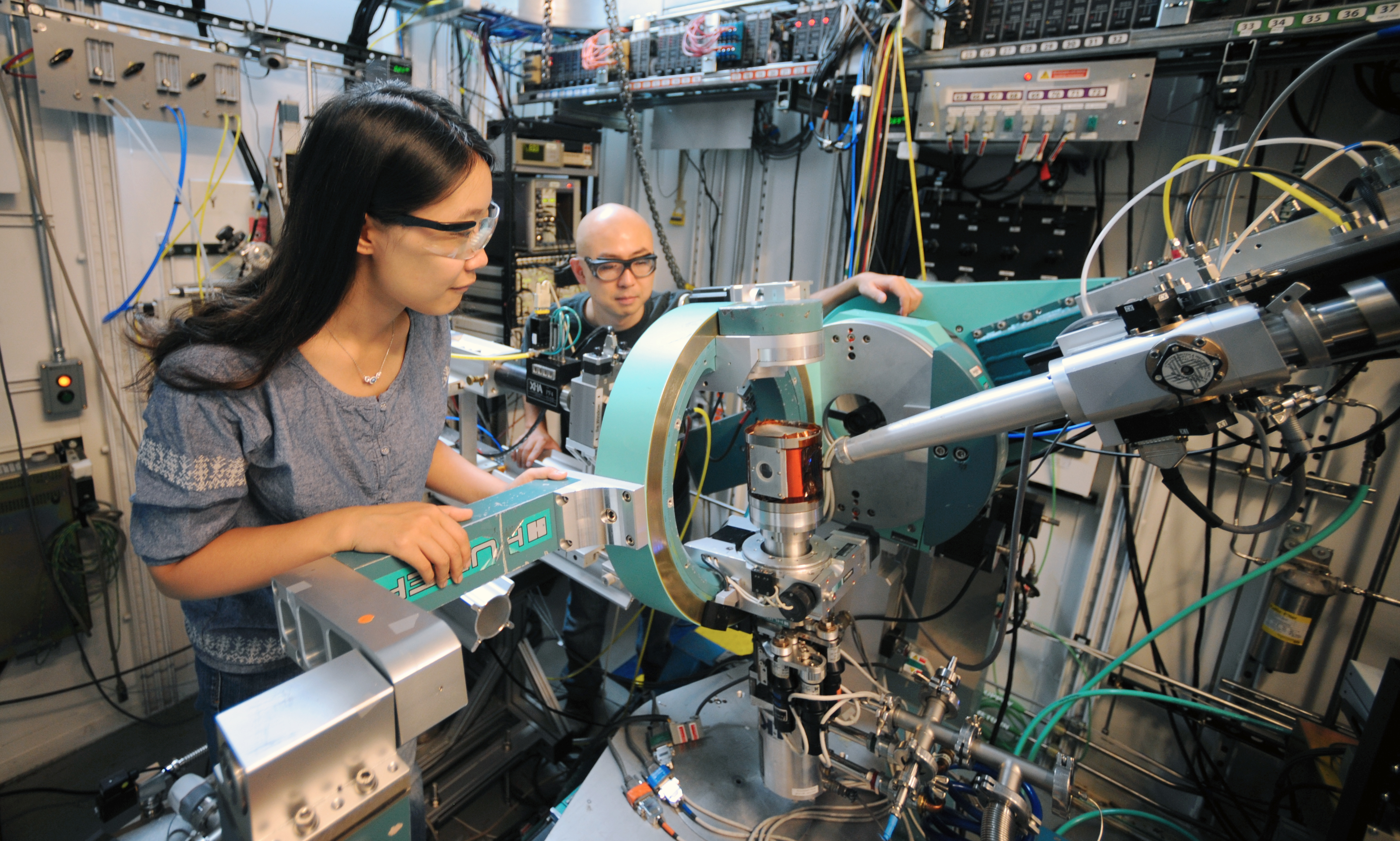 The discovery of a high-pressure superconducting phase in MnP in 2015 was motivated by knowledge of the material’s complex magnetic properties. Researchers already knew that MnP shows a helical spin ordering at ambient pressure and at temperatures below 50K, which gives way to a ferromagnetic phase at a pressure of about 1 Gigapascal (GPa). The ferromagnetic phase is replaced by a new phase, thought to be antiferromagnetic, at about 2 GPa, and superconductivity sets in at about 7 GPa.

A team of researchers from the California Institute of Technology, Argonne National Laboratory, and the Chinese Academy of Sciences using the X-ray Science Division 4-ID-D x-ray beamline at the Argonne APS sought to clarify the character of the intermediate magnetic state between 2 to 7 GPa in order to understand its connection with the adjacent superconducting state.

Helical ordering means exactly what it says: the spins of electrons situated along a line in the lattice have a fixed turn angle, or pitch, from one to the next. To detect this spin pattern, the researchers conducted non-resonant magnetic x-ray diffraction experiments on a sample of MnP held at 4K in a specially designed high-pressure diamond anvil cell. Each anvil had wide perforations on one side so that x-rays could pass in and out of the sample with as little interference as possible from the environment. This was important because the diffraction signal the researchers were looking for was weak, 10-8 of the signal from Bragg diffraction by the lattice.

In general, a diffraction peak indicates periodic patterns of charges or spins (Fig. 1) since they both have interaction cross sections with x-rays. Here the pattern of observed peaks, mirror symmetric along one lattice axis on both sides of an ordered arrangement of charges, suggested that the observed diffraction is associated with a superlattice. The absence of peaks at half the value of transferred momentum value indicated the observed peaks to be fundamental. Moreover, both the low diffraction angles and the low intensity rule out the possibility of charge origin. Since the non-resonant interaction of x-rays with spins at low diffraction angles are predominantly sensitive to the spin component out of the diffraction plane, the researchers concluded that observed peaks most likely originated from a helical magnetic order.

A helical arrangement of spins has both ferromagnetic and antiferromagnetic characteristics, with their relative influence depending on the pitch angle. At ambient pressure, the helical order in MnP possesses a fairly large pitch, meaning that spins of nearest neighbor electrons are not too far apart in orientation, giving them a ferromagnetic character. At higher pressure, though, the newly discovered helical ordering has a much smaller pitch. Nearest-neighbor spins in this arrangement have a substantial angle between them, producing an overall character that is closer to antiferromagnetic, even though the ferromagnetic nature is preserved locally. As the MnP lattice shrank under pressure, the helical pitch decreased proportionately, implying that superconductivity of different types can be facilitated by spin fluctuations of various pitch angles after the static magnetic order has been suppressed.

In comparison to ordinary period-doubling antiferromagnetism, the presence of a ferromagnetic component in helimagnetic materials will suppress the formation of conventional phonon-based superconductivity. Thus, the superconductivity in MnP is more likely to be unconventional. This finding opens the door to experiments on materials related to MnP. For example, chromium arsenide (CrAs) also has helical order with a relatively short pitch, and transitions to a superconducting state under high pressure, whereas manganese silicide (MnSi) exhibits a larger pitch helix and does not show high-pressure superconductivity even down to temperatures of 10 mK above absolute zero. Many other compounds with the same form as MnP exist, where the first element is V/Cr/Mn/Fe/Co/Ni and the second P/As/Sb, all of which show helical magnetic ordering. Careful examination of this family of materials would illuminate the connection between superconducting states and the magnetic state from which they arise.  — David Lindley

J.-G.C. and J.L.L. were supported by the MOST and NSF of China, and the Strategic Priority Research Program of the Chinese Academy of Sciences. Sample preparation at the MRSEC facilities of the University of Chicago was supported by NSF Grant No. DMR-1420709. The work at the California Institute of Technology was supported by U.S. Department of Energy Basic Energy Sciences Award DE-SC0014866. The use of the Advanced Photon Source and the Center for Nanoscale Materials at Argonne National Laboratory was supported by the U.S. Department of Energy Office of Science User Facilities under contract No. DE-AC02-06CH11357.