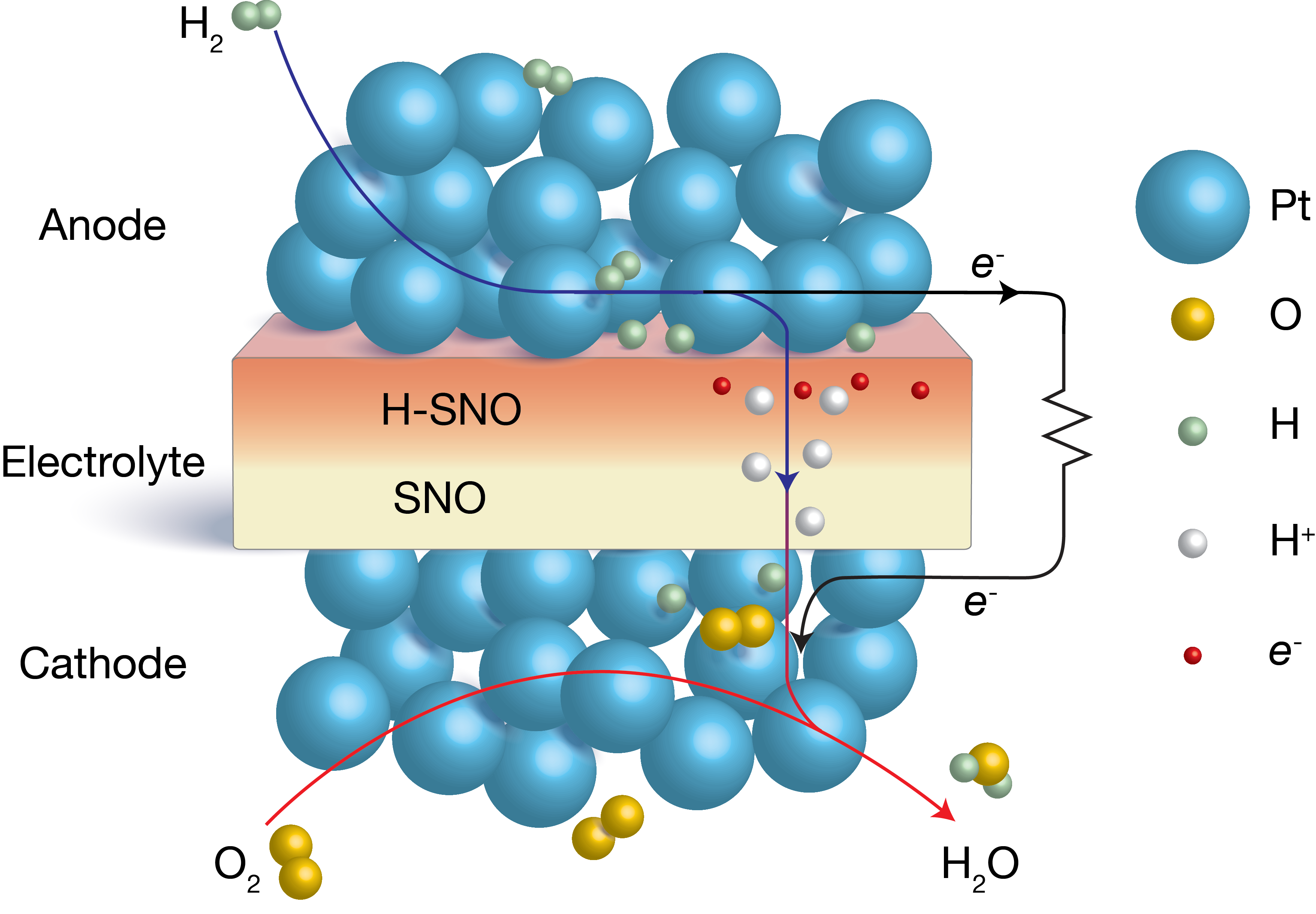 The researchers from Harvard University, Argonne, Rensselaer Polytechnic Institute, SiEnergy Systems, and Purdue University constructed nine free-standing micro-fabricated SOFCs using samarium nickelate (SmNiO3) (SNO) as the electrolyte (Fig. 2), even though it is a good conductor of electrons. SNO proved ideal because when hydrogen fuel is introduced at the anode of the fuel cells, hydrogen molecules dissociate into protons and electrons, creating a hydrogenated form of SNO (H-SNO) on the anode side that is electrically insulating. Once this insulating layer is formed, protons can continue to diffuse through the H-SNO electrolyte as long as hydrogen fuel continues to flow, with the electrons from the disassociated hydrogen molecules that are not involved in doping being forced to travel through the external electrical circuit powered by the SOFC. The H-SNO electrolyte not only showed extremely high ionic conductivity, its activation energy was very low, making it suitable for low-temperature fuel cell operation.

Several factors may collectively lead to the high ionic conductivity and low activation energy in SNO. The researchers theorized that when the hydrogen molecules dissociate, they dope Ni3+ ions in the SNO with some of their electrons, reducing them to Ni2+ ions, thereby forming insulating H-SNO on the anode side. To confirm the electron localization mechanism during fuel cell operation and to reveal the underlying reasons for the high ionic conductivity, both chemical and structural characterizations of the SNO hydrogenation process were performed. X-ray absorption near-edge spectroscopy (XANES) measurements of the nickel K-edge from pristine and hydrogenated SNO samples were conducted at X-ray Science Division (XSD) beamline 12-BM-B, at the APS, while x-ray diffraction measurements were made at XSD beamline 12-ID-D. 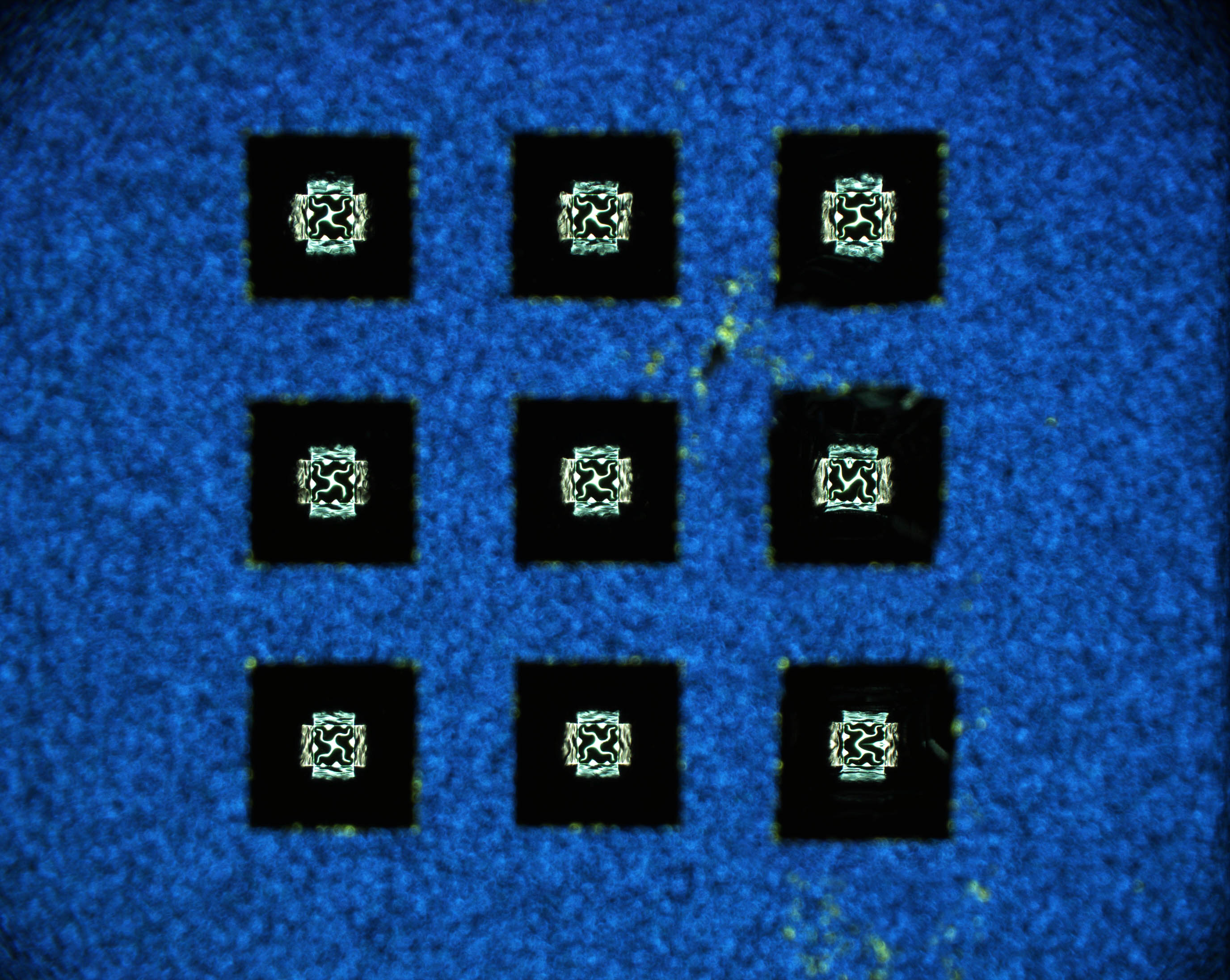 A substantial shift of the absorption edge to a lower energy was observed upon hydrogenation. The energies of the absorption edge and other features were consistent with a valence change to Ni2+ in SNO. The change of Ni valence state also verified that hydrogen exists as protons in H‑SNO. The angle-resolved XANES spectra additionally showed that proton incorporation not only happens at the surface but also throughout the H-SNO film. The synchrotron x-ray diffraction studies suggested that the SNO lattice expands during hydrogenation to accommodate proton transport.

The successful electron doping strategy establishes a new direction for the development of high-performance proton-conducting electrolytes for low-temperature SOFCs.

Financial support was provided by the Army Research Office (grants W911NF-14-1-0348 and W911NF-14-1-0669), the Air Force Office of Scientific Research (grant FA9550-12-1-0189), the Advanced Research Projects Agency-Energy (ARPA-E), an IBM PhD Fellowship, and the National Academy of Sciences. Part of the work was performed at the Center for Nanoscale Systems at Harvard University. D.D.F. was supported by the U.S. Department of Energy (DOE) Office of Science-Basic Energy Sciences, Materials Sciences and Engineering Division. This research used resources of the Advanced Photon Source, a U.S. DOE Office of Science User Facility operated for the DOE Office of Science by Argonne National Laboratory under contract no. DE-AC02-06CH11357.