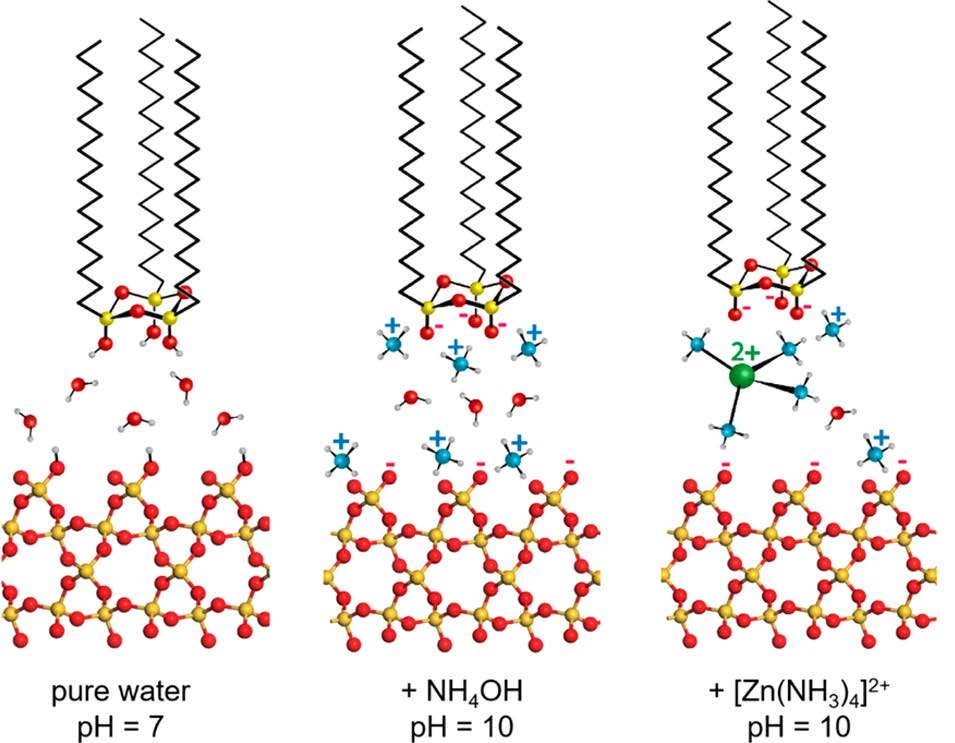 Scientists use catalysts to facilitate chemical reactions for making everything from pharmaceuticals and plastics to pesticides and food additives. Many catalysts are solids, and the reactions take place on their surfaces. Therefore, understanding the surface science is crucial to designing better catalysts. Researchers used the U.S. Department of Energy’s Advanced Photon Source (APS), an Office of Science user facility at Argonne National Laboratory to investigate the surface of ultrathin films of siloxanes at the air-liquid interface, to which metal ions can be attached. This new structural analysis of the films, controversially very different from the former structural interpretations, provides a fresh insight into how these catalysts work and could lead to more efficient catalysts.

Designing new, efficient catalysts for speeding up a range of chemical reactions is a difficult task. Often times, new catalysts are discovered serendipitously. However, a better understanding of how the surfaces of solid catalysts interact with chemical reagents to make different products would be a much more effective approach for deliberate, as opposed to accidental design of catalysts with specificity for given reactions. Specificity means fewer side reactions and more product compound per unit of the reagent, or starting material, the chemist begins with.

Chemists have recently experimented with metal ions of cobalt, iron, and zinc bounded to a type of silicon dioxide known as amorphous silica, which make very stable catalysts. These materials have been shown to accelerate the conversion of propane by removal of some of its hydrogen atoms (dehydrogenation) to the more useful propene. Propene can be processed further into other chemically important compounds as well as being polymerized into polypropylene. Following the catalytic processes is difficult with conventional surface spectroscopic techniques. Unfortunately, these otherwise rather powerful techniques such as extended x-ray absorption fine structure and x-ray absorption near edge structure are not amenable to studying solid-liquid interfaces of the catalysts because of interference with the bulk solutions.

These limitations have almost put the study of this kind of catalyst off-limits. However, a new type of surface study using the ChemMatCARS 15-ID-C beamline at the APS has allowed researchers from the Illinois Institute of Technology, Argonne, and The University of Chicago to instead probe the surface chemistry of monolayers of a silicon compound to which the catalytic metal ions can be attached. These ultrathin films, acting as a model for the amorphous silica catalysts, can then be studied with grazing incidence x-ray diffraction, x-ray reflectivity, and x-ray fluorescence spectroscopy.

Zinc ions can be bound to monolayer films of octadecyltrioxysilane that are formed from octadecyltrimethoxysilane through the reactions of hydrolysis and condensation. Indeed, other researchers have tested these ultrathin films and suggested polymer formation based on x-ray and infrared surface studies. However, the new study on the ChemMatCARS beamline argues that the formation of polymers in this system is inconsistent with the experimental x-ray data (Fig. 1). These researchers explain that polymer formation is energetically unfavorable and is highly unlikely. Instead, based on their analysis, they have proposed formation of tiny rings of the siloxane molecules made of three units (trimers) rather than long, linear polymer chains.

Such cyclic trimers are entirely consistent with the new x-ray studies as well as with infrared data of the earlier research. According to the new data, positively charged zinc ions bind to the negatively charged oxygen atoms of the hydroxyl groups of the film. The cyclic trimers of the monolayer imitate the function of active sites of amorphous silica surface that are known to bind zinc ions at the solid-liquid interface. Moreover, the ratio of zinc ions to those hydroxyl groups is the same as is measured in zinc-on-silica catalysts and so it can be presumed that the nature of the active sites in the model material is the same as in the catalyst itself.

This new insight thus points the way to a clearer understanding of metal-on-amorphous-silica catalysts and offers the possibility of new approaches to making these catalysts more effective and efficient for the production of fine chemicals. The team suggests that additional studies must now be carried out to confirm definitively the one-to-one correspondence between their model and catalytic surface of amorphous silica.