Putting the Squeeze on Hydrogen and Sodium for Superconductivity 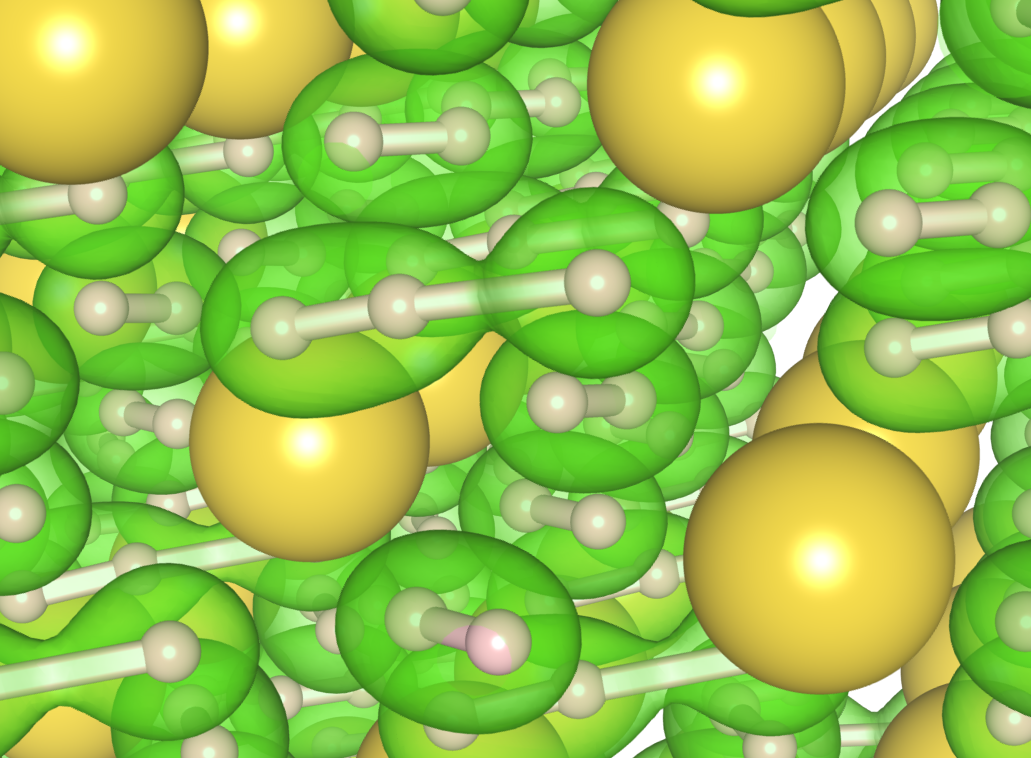 Superconductivity is a hot phenomenon that occurs only at very cold temperatures.  Finding ways to change that and make superconductivity practical at higher temperatures is a major goal for physicists and engineers.  One possibility involves the metallic phase of hydrogen, theorized to be superconducting at ambient temperatures but yet to be achieved in practice.  By synthesizing a compound of hydrogen with sodium using the U.S. Department of Energy’s Advanced Photon Source (APS), an Office of Science user facility, experimenters have achieved a new class of sodium polyhydrides, taking a highly promising first step toward achieving practical high-temperature, ambient pressure superconductivity.  The unusual linear electronic structure of these polyhydrides lends itself to the creation of new metallic materials with superconducting properties at higher temperatures than previously possible. They may also be useful for hydrogen storage applications in fuel cells.

For years, polyhydride compounds, in which hydrogen atoms are combined with alkali metals such as sodium, lithium, or potassium atoms, have been predicted to display unusual properties and structures under high temperatures and pressures, including the possibility that superconducting properties might remain even at ambient temperatures and pressures.  Such metallic hydrogen compounds would feature several H3-   ions in a linear configuration that would resemble a one-dimensional phase of hydrogen.  But these intriguing theoretical predictions have eluded experimental confirmation.  Recent reports of the production of Li polyhydrides seemed to favor theoretical models, but the resulting samples were not fully characterized to confirm their structure.

The research team in this experiment, from the Carnegie Institution of Washington, the Center for High Pressure Science and Technology Advanced Research (China), Lawrence Livermore National Laboratory, University College London (UK), the University of Cambridge (UK), Cavendish Laboratory  (UK), The University of Chicago, and the Chinese Academy of Sciences set out to synthesize sodium and lithium polyhydrides using a laser-heated diamond anvil cell (DAC) at the GeoSoilEnviro CARS (GSECARS) 13-ID-C,D x-ray beamline at the Argonne APS.  Experiments at pressures up to of 70 GPa at room temperature showed no polyhydride phase in either Na or Li, but upon laser heating up to temperatures of about 2000° K at pressures of approximately 30 to 40 GPa, the researchers observed the formation of NaH polyhydrides (Fig. 1).

They investigated the newly-formed material using both x-ray diffraction (XRD) and Raman spectroscopy at GSECARS, both of which confirmed that the material’s structure was quite different from pure hydrogen.  Two stable phases were identified, NaH3 and NaH7, although the former was far more dominant.  Even higher polyhydrides might be present in the synthesized samples, although the data for them are inconclusive.  The team's results match very well with their own theoretical calculations, which used the ab initio random structure searching method and predicted the NaH3 phase and several others more favorable than those theorized in previous work.

Since the experiments involved very high pressures and temperatures confined to a small space inside the DAC at GSECARS, the experimenters faced some special challenges in obtaining their data.  Laser heating of hydrogen under such conditions can result in breaking and failure of the DAC, and the team experienced this problem during most of their experiments, requiring repeated runs to ensure the collection of sufficient data for measurements and characterization.  The researchers note that while prolonged laser heating is likely the best method for producing good single-phase samples, the susceptibility of DACs to failure in the presence of hydrogen makes this difficult at present.

The researchers plan to extend this work into the investigation of new classes of alkali metal polyhydrides, particularly the possibility of synthesizing them more easily at lower temperatures and pressures.  The present work is a significant step in creating the materials to eventually make superconductivity practical and accessible.  — Mark Wolverton

High-pressure experiments were supported by the U.S. Department of Energy-Basic Energy Sciences (DOE-BES) under Contracts no. DE-FG02-02ER45955 and DE-FG02-99ER45775. D.Y.K. and T.M. acknowledge salary support by Energy Frontier Research in Extreme Environments Center, an Energy Frontier Research Center funded by the U.S. DOE Office of Science under Award Number DE-SC0001057. C.J.P. and R.J.N. were supported by the Engineering and Physical Sciences Research Council of the UK. E.S. and A.F.G. acknowledge support of DARPA under contracts no. W31P4Q1310005 and W31P4Q1210008. R.J.N. acknowledges financial support from the Engineering and Physical Sciences Research Council of the U.K. [EP/J017639/1]. C.J.P. acknowledges financial support from EPSRC [EP/G007489/2]. E.S. has performed parts of the work under the auspices of the U.S. DOE by Lawrence Livermore National Security, LLC, under Contract no. DE- AC52-07NA27344. A.F.G. acknowledges support of National Science Foundation of Chins (no. 21473211). GSECARS is supported by the National Science Foundation-Earth Sciences (EAR-1128799) and DOE-Geosciences (DE-FG02- 94ER14466). This research was supported by the Australian Research Council. This research used resources of the Advanced Photon Source, a U.S. DOE Office of Science User Facility operated for the DOE Office of Science by Argonne National Laboratory under contract no. DE-AC02-06CH11357.