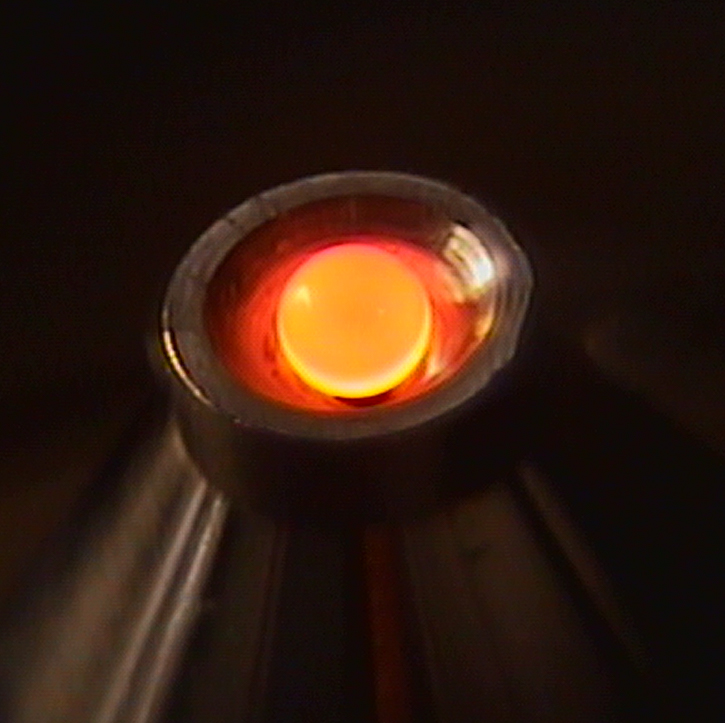 For decades, scientists have altered the chemical composition and structure of glass to improve performance.  That’s why brownies can be baked in Pyrex and the screen on a dropped smartphone often doesn’t break. To discover glasses that are more functional and/or less expensive, scientists model the melt properties of glass-forming liquids. Researchers in this study used the thermodynamic model of ideal associated solutions to predict the temperature dependent properties of sodium borate glasses and then tested their model experimentally using high-intensity, high-energy x-rays from the U.S. Department of Energy’s Advanced Photon Source (APS). The model predicted the structural transition found in molten Na2B4O7, suggesting that it provides a much more computationally inexpensive method of structure prediction than molecular dynamics, covering the equilibrium melt, supercooled liquid, and glassy states.

As an amorphous material, the structure of glass is affected not just by its composition, but also by its thermal history. Modeling allows researchers to better understand the properties of different compositions of glasses and thus drive the development of novel glasses that propel technological advances forward. Glass modeling is increasingly done by topological constraint theory: the idea that these materials are created by nodes (atoms) that are constrained by rigid rods (chemical bonds). However, while this model works well at ambient temperature, it is not always effective at higher temperatures. For example, the model does not predict the sodium borate glass transition temperature plateau, at 20−40 mol % Na2O, which is important, as sodium borosilicate glasses are in widespread use as Pyrex and optical glasses.

The researchers, from Materials Development. Inc. (MDI); Argonne National Laboratory; the Alexander Dubček University of Trenčín and RONA (Slovak Republic); the Institute of Chemical Technology Prague (Czech Republic); and Northwestern University set out to determine whether the thermodynamic model of ideal associated solutions could predict important temperature dependent structural changes, which can greatly affect the glass transition temperatures and melt properties important during glass making.  This model describes an oxide liquid as an ideal solution of end member oxides and any crystalline compounds forming within the system. The model has no free parameters and requires as input the melt composition and the free energies of formation, and local structure, of each compound; it outputs their relative amounts based on the laws of mass action and mass balance. The thermodynamic model predicts temperature dependence of the B−O coordination in the composition region 20−50 mol % Na2O—in line with the glass transition temperature plateau.

To test the predictions, the team created borate (Na2B4O7) spherical beads that they suspended in an aerodynamic levitation furnace (Fig. 1) and then supercooled them from equilibrium liquid through the glass transition. The team used high-energy x-ray diffraction measurements made at X-ray Science Division beamline 6-ID-D of the Argonne APS, which revealed a continuous structural transition in the network liquid, evolving from a low-density, depolymerized melt at about 300 K above the melting temperature, to a dense polymerized melt close to the glass transition. Thereby, the thermodynamic model of ideal associated solutions was shown to be able to predict temperature-driven structural rearrangements at different temperatures.

These results will help researchers to improve industrial glass design and manufacture, a process that will continue as MDI begins a four-year, NASA-funded project. The researchers will measure the thermophysical properties of molten metal oxides as they supercool in low gravity conditions—keeping the fluid free from convection—to more accurately measure physical properties. Initially, the researchers will use MDI and NASA levitation instruments and then will perform experiments on the International Space Station. To better understand glass formation at the atomic level, the researchers will also continue to use the APS.  — Dana Desonie