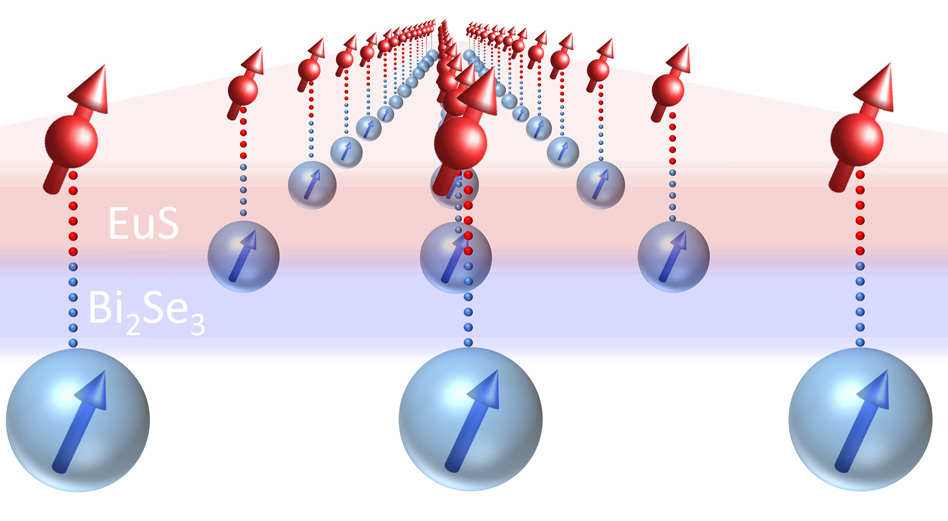 The original MIT press release by David L. Chandler can be read here.

A new and unexpected magnetic effect supported in part by experiments at the U.S. Department of Energy’s Advanced Photon Source (APS) has taken an international team of researchers by surprise, and could open up a new pathway to advanced electronic devices and even robust quantum computer architecture.

The finding is based on a family of materials called topological insulators (TIs) that has drawn much interest in recent years. The novel electronic properties of TIs might ultimately lead to new generations of electronic, spintronic, or quantum computing devices. The materials behave like ordinary insulators throughout their interiors, blocking electrons from flowing, but their outermost surfaces are nearly perfect conductors, allowing electrons to move freely. The confinement of electrons to this vanishingly thin surface makes then behave in unique ways.

But harnessing the materials’ promise still faces numerous obstacles, one of which is to find a way of combining a TI with a material that has controllable magnetic properties. Now, researchers at MIT and elsewhere say they have found a way to overcome that hurdle.

The research team from the Massachusetts Institute of Technology (MIT), Oak Ridge National Laboratory, the Institut fuer Theoretische Physik III (Germany), the Institut fuer Festkoerper-und Werkstoffforschung (Germany), Northeastern University, the Paris Sciences et Lettres Research University (France), the Saha Institute of Nuclear Physics (India), and Argonne, led by Jagadeesh Moodera of the MIT Department of Physics and postdoc Ferhat Katmis, was able to bond together several molecular layers of a topological insulator material called bismuth selenide (Bi2Se3) with an ultrathin layer of a magnetic material, europium sulfide (EuS). The resulting bilayer material retains all the exotic electronic properties of a TI and the full magnetization capabilities of the EuS.

But the big surprise was the stability of that effect. While EuS itself is known to retain its ability to hold a magnetic state only at extremely low temperatures, just 17 degrees above absolute zero (17 Kelvin), the combined material keeps those characteristics all the way up to ordinary room temperature. That could make all the difference for developing devices that are practical to operate, and could open up new avenues of device design as well as research into a new area of basic physical phenomena.

The findings are being reported in the journal Nature. A number of research techniques were employed. These included a series of soft x-ray absorption spectroscopy experiments to confirm the quality of samples, carried out at beamline 4-ID-C of the APS by simultaneous measurement of the surface sensitive total electron yield and the bulk sensitive fluorescence yield (the APS is an Office of Science user facility at Argonne).

The room-temperature magnetic effect seen in this work, Moodera says, was something that “wasn’t in anybody’s wildest expectations. This is what astonished us.” Research like this, he says, is still so near the frontiers of scientific knowledge that the phenomena are impossible to predict. “You can’t tell what you’re going to see next week or what’s going to happen” in the next experiment, he says.

In particular, novel combinations of two materials with very different properties “is an area with very little depth of research.” And getting clear and repeatable results depends on a high degree of precision in the preparation of the surfaces and joining of the two materials; any contamination or imperfections at the interface between the two – even down to the level of individual atomic layer – can throw off the results, Moodera says. “What happens, happens where they meet,” he says, and the careful and persistent effort of Katmis in making these materials was key to the new discovery.

The finding could be a step toward new kinds of magnetic interactions at the interfaces between materials, with stability that could result in magnetic memory devices which could store information at the level of individual molecules, the team says.

The effect, which the researchers call proximity-induced magnetism, could also enable a new variety of “spintronic” devices based on a property of electrons called spin, rather than on their electrical charge. It might also provide the first practical way of producing a kind of particle called Majorana fermions, predicted by physicists but not yet observed convincingly. That in turn could help in the development of quantum computers, they say.

“A nice thing about this is that it shows both very fundamental physics and also takes us forward to many possible applications,” Katmis says. He says the effect is somewhat similar to unexpected findings a decade ago in the interfaces between some oxide materials, which has triggered a decade of intensive research.

This new finding, coupled with other recent quantum behavior observed in TIs, can lead to many possibilities for future electronics and spintronics, the team says.

“This beautiful work from Moodera’s group is a very exciting demonstration that the whole is greater than the sum of its parts,” says Philip Kim, a professor of physics at Harvard University, who was not involved in this work. “Topological insulators and magnetic insulators are two completely dissimilar materials. Yet they produce very unusual emergent effects at their atomically clean interface,” he adds. “The enhanced interfacial magnetism shown in this work can be very relevant to building up novel spintronics devices that can process information with low energy consumption.”

The research conducted at ORNL’s Spallation Neutron Source was sponsored by the Scientific User Facilities Division-Basic Energy Sciences, U.S. Department of Energy Office of Science (DOE-SC). F.K., P.J.-H., and J.S.M. thank the MIT MRSEC through the MRSEC Program of the National Science Foundation (NSF) under award number DMR-0819762 (upgrade of the molecular beam epitaxy system) for support. J.S.M. thanks the NSF (DMR- 1207469), Office of Naval Research (N00014-13-1-0301) and the STC Center for Integrated Quantum Materials under National Science Foundation grant DMR-1231319 for support, and the thin-film growth and characterization of the materials used. The heterostructure characterization was supported by the U.S. DOE-SC Basic Energy Sciences, Division of Material Sciences and Engineering under award number DE-SC0006418 (F.K. and P.J.-H.). B.A.A., M.E.J. and D.H. thank the NSF under award numbers DMR-0907007 and ECCS-1402738 (for SQUID magnetometry characterization) for support. B.A.A. is also supported in part by the Agence Nationale de la Recherche LabEx grants ENS-ICFP (ANR-10-LABX-0010/ ANR-10-IDEX-0001-02 PSL). I.E. and F.S.N. acknowledge the German Research Council (DFG) for the financial support under the collaborative research centre SFB TR 12 and the priority programme SPP 1666 (grant number ER 463/9). This research used resources of the Advanced Photon Source, a U.S. Department of Energy Office of Science User Facility operated for the U.S. Department of Energy Office of Science by Argonne National Laboratory under Contract No. DE-AC02-06CH11357.