A Gold Alloy with an Extra Electron 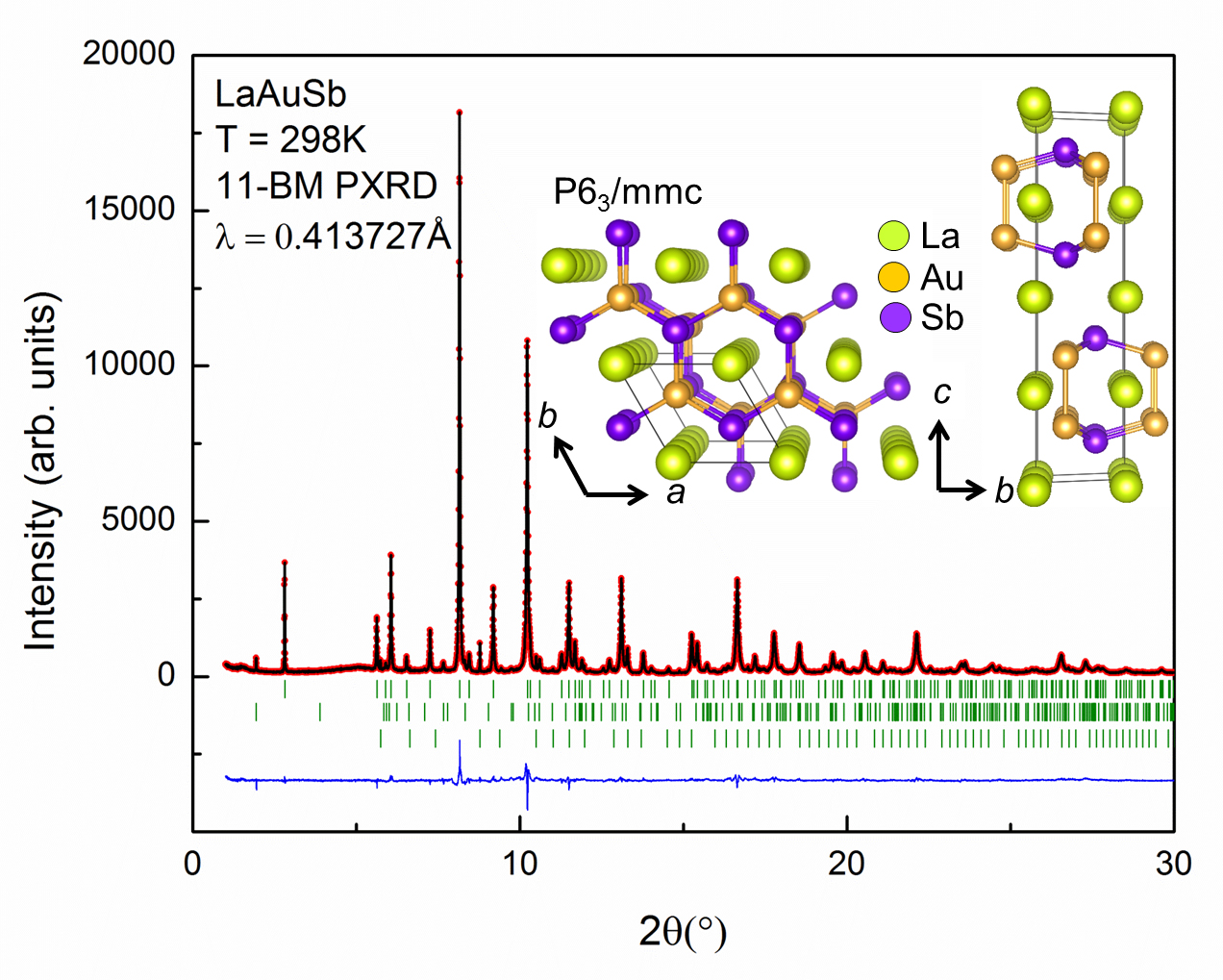 A novel gold compound with an “extra” electron compared to its chemical cousins is predicted to be a 3D Dirac semimetal, a relatively new class of electronic materials in which electrons behave as though they are massless, leading to high mobilities and unusual physics.  The discovery, made at the U.S. Department of Energy’s Advanced Photon Source (APS), expands the search for possible thermoelectric materials (which make up Peltier coolers and thermoelectric generators) to include compounds with gold-gold bonds that stabilize "abnormal" electron counts. Such materials have very fast-moving electrons that could be used in circuits.  Alternatively, these semimetals may have applications for solid-state cooling or heating.

The material contains three different metals: gold, the metalloid antimony (which has some properties of metals and non-metals like arsenic and sulfur), and a light metal from the lanthanide group, including lanthanum, cerium, samarium, praseodymium, or neodymium (well known as a metal in superstrong magnets). These phases crystallize in a 1:1:1 ratio, with the formula LnAuSb (Ln = La-Nd, Sm).

Synchrotron powder X-ray diffraction studies on X-ray Science Division beamline 11-BM-B at the APS (an Office of Science user facility) show that these ternary compounds crystallize into buckled honeycomb layers of hexagonal gold and antimony groups with the lanthanide  filling the spaces in the crystal lattice to form a YPtAs- (yttrium-platinum-arsenic) type structure (Fig. 1). The study also reveals that the gold atoms pair up to form dimers.

When the electrons are counted, it turns out that they have one more valence electron (for a total of 19 electrons) than previously studied materials with essentially the same formula — LnAuZ, where Ln is any lanthanide, Au is gold, and Z is a main group element such as tin, lead, or bismuth. Typically, these phases have 18 electrons, which creates small band-gap semiconductors. “Extra” electrons usually make these structures unstable.

In this case, the gold dimers that connect the honeycomb layers seem to accommodate this extra electron, behaving as they do like a molecular layer rather than a metallic layer in the material. It is this phenomenon that makes this material stable, despite that putatively reactive extra electron. Moreover, it also gives the materials unique properties not seen in other related ternary compounds. Theoretical calculations confirm the structural features and characteristics that emerge from the powder diffraction data.

Previously, only the ternary material CeAuSb was known to exist, but scientists had not determined its crystal structure definitively. Indeed, earlier work had suggested that it had a two-layer, disordered structure with several impurity phases. However, the study on beamline 11-BM-B found that the actual structure is four-layered and that peaks previously assigned to impurity phases were the result of this more complicated crystal structure.

Critically, this four-layer structure is driven by gold-gold bonding. The newly determined details show that the lanthanide atoms in all the ternary compounds investigated are each bonded, or coordinated to, 12 other atoms in the structure. The antimony atoms, by contrast, form a trigonal prism with the lanthanide atoms and three bent gold-antimony bonds cut through these prisms. If the gold-gold dimers are considered to be individual units themselves, they are nine-coordinate within a trigonal prism of antimony atoms bearing straight lanthanide bonds.

The separation between the honeycomb layers is then determined by the size of the lanthanide metal in any given ternary compound. Intriguingly, the interlayer bonds between the gold atoms in each layer are longer than the bonds between gold atoms in the pure metal. But they fall well within the normal range seen in gold compounds containing elements attracted to the metal through the “aurophilic” interactions seen in organometallic gold compounds, in which relativistic effects alter the electron structure of the gold atoms to allow them to form bonds that would otherwise seem impossible.

In addition, the theoretical calculations suggest that the material is almost fully “gapped out” (large gaps create insulators, small gaps create semiconductors, and no gap creates a metal), which means those are real gold-gold bonds between the layers. The research suggests that the very character of the whole class of these ternary compounds is driven by the nature of the gold-gold interactions within.

This research was supported by the Air Force MURI on thermoelectric materials, Grant No. FA9550-10-1-0553, and by SPAWAR Grant NN66001-11-1-4110. This research used resources of the Advanced Photon Source, a U.S. Department of Energy (DOE) Office of Science User Facility operated for the DOE Office of Science by Argonne National Laboratory under Contract No. DE-AC02-06CH11357.