The mixing of fuel and oxidizer for combustion is a fundamental element in a wide range of propulsion and power systems. It is usually accomplished by atomization, in which one or more liquids are dispersed as a spray of evaporating droplets, sometimes to be ignited. Studying the multiphase physics of atomizing sprays, particularly in the opaque near-nozzle region, is a challenge, but also a critical step in validating computational models and optimizing combustion performance parameters. A team of researchers has devised a new answer to that challenge by developing a nonintrusive technique using simultaneous x-ray radiography and x-ray fluorescence at the U.S. Department of Energy’s Advanced Photon Source (APS) at Argonne. The technique allows the accurate quantitative measurement of gas and liquid phase distributions in an atomizing spray simultaneously and without physically intrusive techniques. It is also quite sensitive to small changes in and between gas and liquid phases that can have significant effects on mixing behavior in practical applications. This work was published in Optics Letters.

A big problem in probing the interior dynamics of atomizing sprays is separating the different components from one another, from the standpoint of both species and phase. For example, determining the distribution of liquid droplets of varying sizes can be difficult by optical means due to scattering, reflection, or refraction. X-ray radiography can avoid such phenomena, but can lead to ambiguous results in a complex and heterogeneous mixture.

This research team from the NASA-Johnson Space Center, Wright-Patterson Air Force Base, Iowa State University, and Argonne overcame these difficulties by combining x-ray radiography with x-ray fluorescence at the X-ray Science Division 7-BM-B, a unique facility that is primarily dedicated to the study of transient fluid flowfields (e.g., high-speed liquid sprays and compressible gas flowfields) as well as other types of time-resolved radiography measurements. The combination of x-ray radiography with x-ray fluorescence allows for individual components of the flow to be tracked unambiguously and resulted in clear measurements of gas and liquid phase distributions in the spray.

To achieve this, the researchers simulated a gas-liquid coaxial injector with argon and water, while also dissolving zinc and nickel salts into 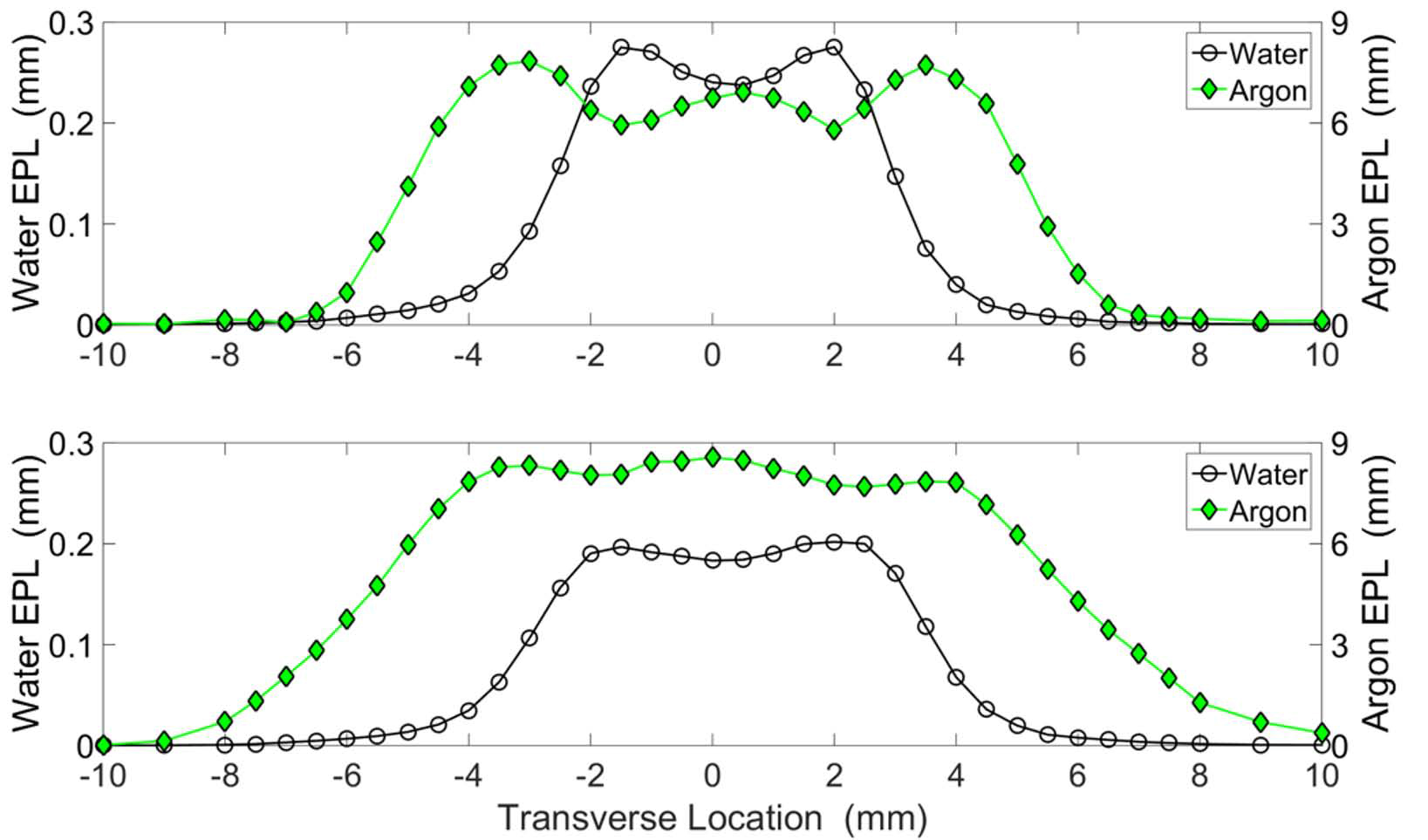 the water as fluorescent tracers. Using two tracer species allows for more accurate measurement of reabsorption in the spray since the differing fluorescence of each can be compared. A silicon drift diode perpendicular to the monochromatic x-ray beam measured fluorescence (Fig.1).

To quantify the distributions of the separate phases, radiography and fluorescence data were recorded at several points in transverse scans across the injector. As absorption occurred from both the liquid and the gas, the radiography measurements alone could not differentiate between the different phases. On the other hand, the measured fluorescence signal from the liquid tracers could be used to determine the amount of liquid in the path of the x-ray beam. With this knowledge and the radiography data, the amounts of both liquid and gas could be determined.

The observed spray demonstrated a center core of liquid surrounded chiefly by an outer gas core, which showed increasing atomization and mixing as distance increased from the injector exit. Although the amount of the liquid phase seen in the data dropped as one moved downstream in the spray, the amount of gas actually increased, which the experimenters attribute to deceleration and broadening of the spray as it mixed with air or ambient gas (Fig.2).

The team next plans to expand their simultaneous x-ray fluorescence and radiography technique to the study of fluids and conditions closer to actual systems currently in use, confirming and enhancing the utility of this new approach.

The work was sponsored by the Propulsion and Power Division at the NASA-Johnson Space Center and by the Army Research Office (Dr. Ralph Anthenien, Program Manager). This research used resources of the Advanced Photon Source, a U.S. Department of Energy (DOE) Office of Science User Facility operated for the DOE Office of Science by Argonne National Laboratory under Contract No. DE-AC02-06CH11357.