A Band of Itinerant Ferromagnetism Is Identified in an Antiferromagnet 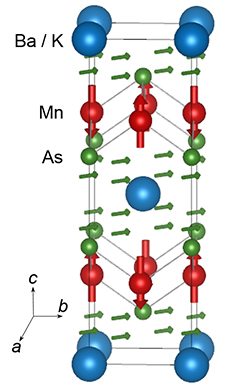 The search for unconventional superconductivity has resulted in the discovery of several materials possessing remarkable couplings among their lattice, charge, and magnetic degrees of freedom. These couplings may be tuned by making small alterations to their chemical structures through, for example, electron or hole doping via chemical substitution. The recent discovery of high-temperature superconductivity in BaFe2As2 has sparked interest in BaMn2As2, an important material having the same crystal structure. Ba0.60K0.40Mn2As2, in which potassium (K) is substituted for some of the barium (Ba), was found to have a novel magnetic ground state in which itinerant ferromagnetism (FM) below a Curie temperature of about 100 K coexists with collinear antiferromagnetism (AFM) of the manganese (Mn) local moments (Fig. 1). Of particular interest to these scientists was the origin of the itinerant FM, which they were able to assign precisely to the conduction band formed by the 4p electrons of arsenic (As) atoms through experiments conducted at two X-ray Science Division (XSD) x-ray beamlines at the U.S. Department of Energy’s Advanced Photon Source (APS), an Office of Science user facility. The scientists also investigated whether the observed FM ordering in Ba0.6K0.4Mn2As2 is related to a canting of the ordered Mn moments.

Single-crystal and polycrystalline (powder) samples of Ba0.6K0.4Mn2As2 were subjected to x-ray absorption spectroscopy (XAS) and x-ray magnetic circular dichroism (XMCD) measurements. During such measurements, the x-ray energy is tuned through the absorption edges of the constituent elements, providing elemental specificity. The circularly polarized photons induce a transition from occupied core states (e.g., 1s or 2p ground states for K or L edges, respectively) to unoccupied states with energies greater or equal to the Fermi energy. Since the orbital angular momentum is 0 for K absorption edges and there is no spin-orbit splitting for the initial state, XMCD probes the magnetic polarization of the orbital moment of the final p states. For L edges, the spin and orbital polarization of the final d states are probed. Therefore, XMCD can be viewed as an element- and orbital-specific probe of the magnetization of a sample.

The researchers, from Ames Laboratory, Iowa State University, and Argonne found a strong peak in the XMCD signal at the As K x-ray absorption edge (Fig. 2), which disappeared when the crystal’s c axis was aligned parallel to the x-ray beam, but a featureless XMCD signal across the Mn L2 and L3 absorption edges. The XMCD signal at the As K edge appeared below the Curie temperature of about 100 K due to FM ordering in the As 4p conduction band, and its intensity increased with decreasing temperature in agreement with previous bulk magnetization measurements. 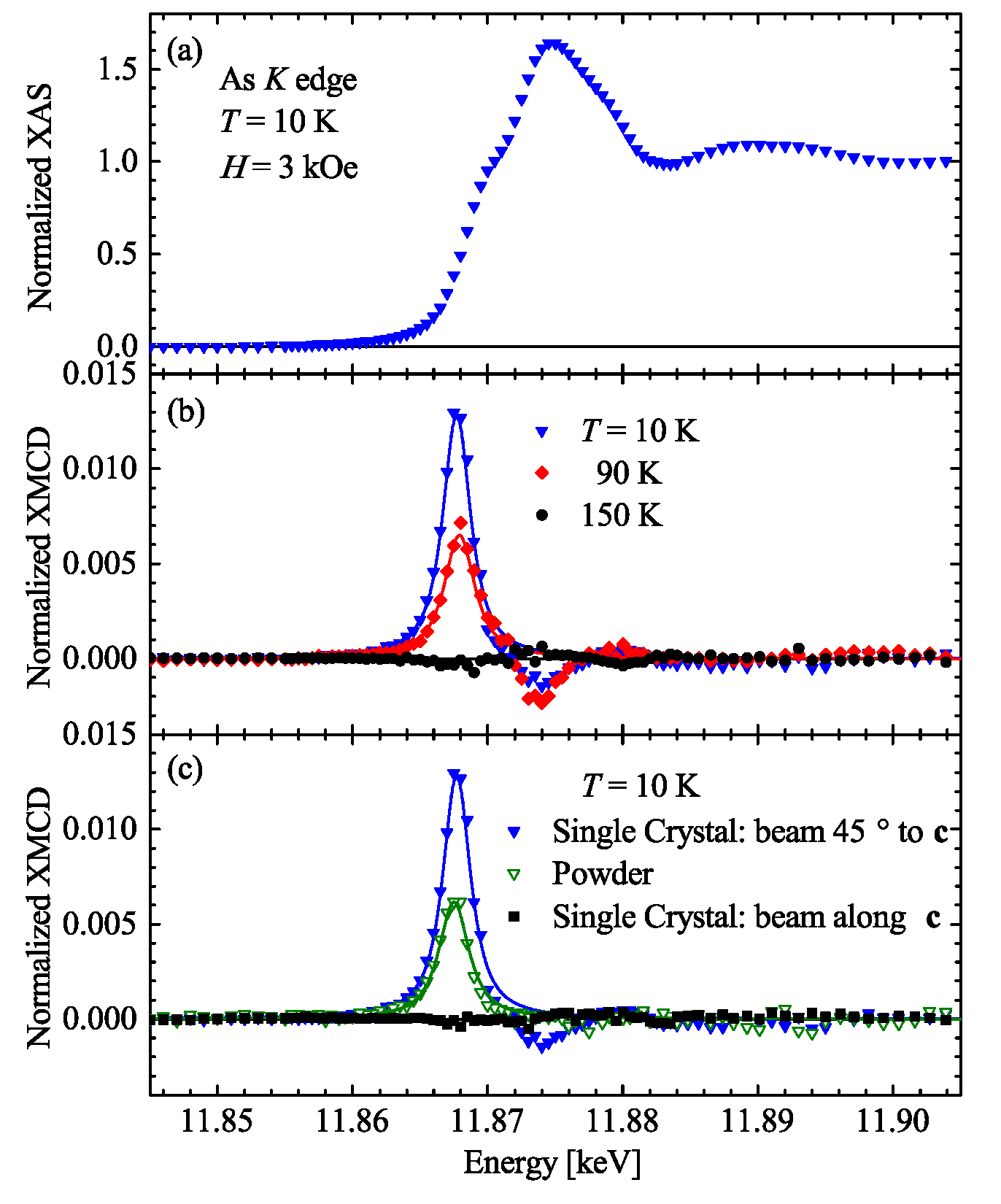 The XMCD signal at the As K edge demonstrated that the FM order in Ba0.6K0.4Mn2As2 occurs in the As 4p conduction band and that the FM moments lie in the plane that is perpendicular to the direction in which the AFM-ordered Mn moments point. The absence of a net XMCD signal at the Mn K, L2, and L3 edges shows that the FM is not associated with the Mn 3d and 4p bands. These results demonstrate that the local-moment AFM order of the Mn and the itinerant FM in the As 4p conduction band are distinct, and illustrate the power of XMCD measurements to assign FM to a specific element and its associated band.

Work at the Ames Laboratory was supported by the U.S. Department of Energy (DOE), Basic Energy Sciences, Division of Materials Sciences & Engineering, under Contract No. DE-AC02-07CH11358. The research used resources of the Advanced Photon Source, a DOE Office of Science User Facility operated for the DOE Office of Science by Argonne National Laboratory under Contract No. DE-AC02-06CH11357.