A Subtle Transition from Insulator to Conductor 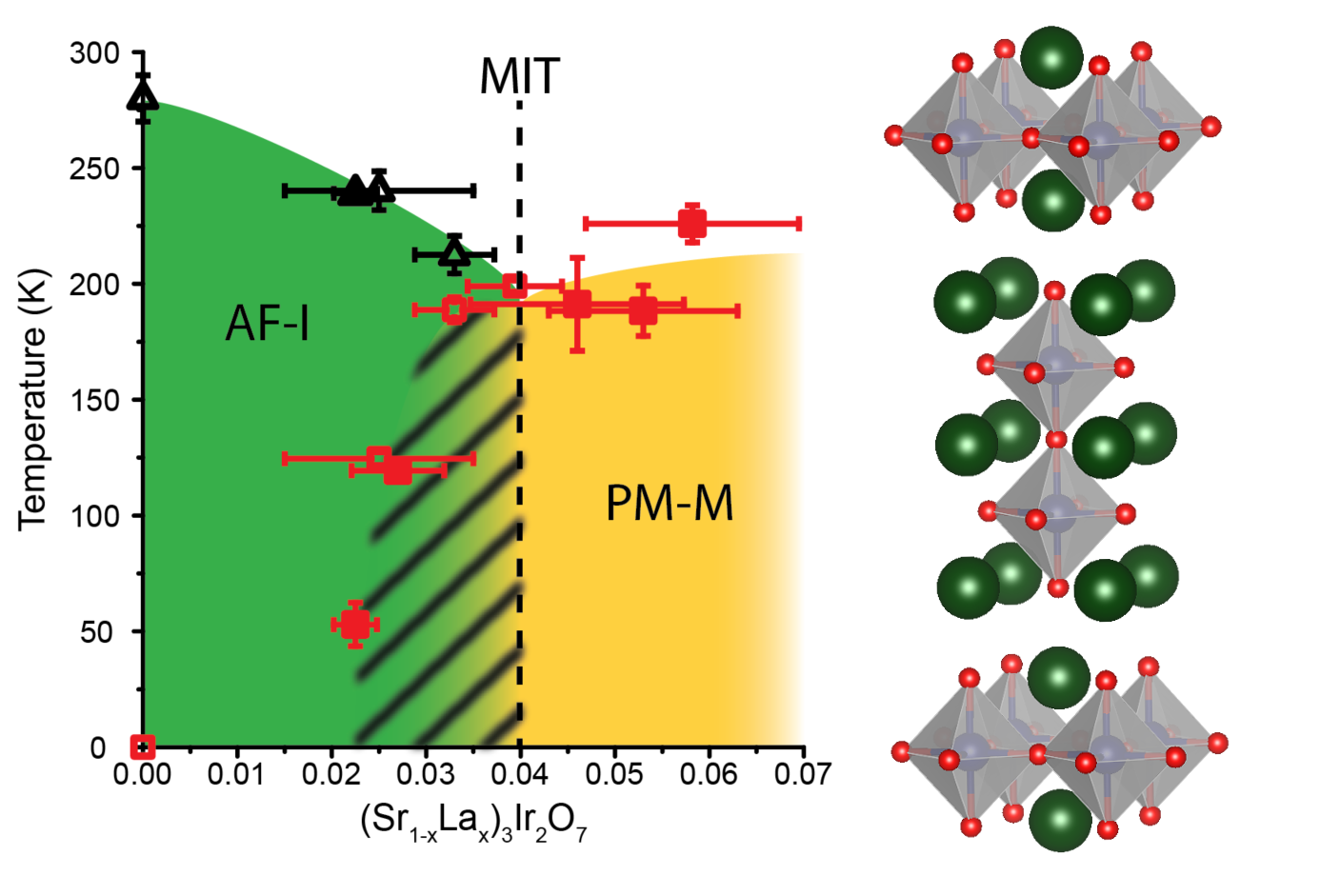 A Mott insulator is a material that seems as if it ought to be a conductor, but is not, due to electronic interactions that disturb the would-be conduction band. Recently, a new class of these special insulators was uncovered in materials where a relativistic effect known as “spin-orbit coupling” works cooperatively with these electronic interactions to stabilize an unexpected Mott state. These new spin-orbit Mott states are predicted to host many exciting new phenomena such as high-temperature superconductivity and topologically protected electronic states.The electronic structure of many Mott insulators is delicately balanced, however, so that small changes in external or internal conditions can tip the material into becoming a conductor. How these materials transition from insulators into conductors, as well as the properties of the metaIs that result once the material exits the Mott state, give clues to their potential for hosting many of the novel states predicted.  Using an array of diagnostic techniques that included x-ray scattering studies, researchers utilizing high-brightness x-rays from the U.S. Department of Energy’s Advanced Photon Source (APS) and National Synchroton Light Source (NSLS) have investigated the insulator-to-metal transition in a spin-orbit Mott state built from strontium-iridium oxide. They found that the metallic state appears in discrete nanoscale patches before taking over globally, and that even then, remnants of the original Mott insulator character persist.

Strontium iridium oxide, Sr3Ir2O7 or Sr327, has a quasi-two dimensional bilayer lattice structure. Simple band theory calculations suggest that one valence electron from each iridium atom should be able to travel freely in a conduction band, but such calculations ignore individual electron-electron interactions. In this material, spin-orbit coupling of the valence electrons alters its state just enough to allow electron-electron interactions that create a small energy gap between it and the conduction band, and Sr327 is instead a Mott insulator.

Previous experiments have shown that substituting lanthanum for strontium turns the material into a metal. Adding lanthanum is equivalent to electron doping: each lanthanum atom provides an additional valence electron. But how this doping changes the structure and electronic properties of Sr327 and turns it into a conductor has remained unclear.

Researchers from Boston College; the University of California, Santa Barbara; the Canadian Neutron Beam Centre; Oak Ridge National Laboratory; Brookhaven National Laboratory; Argonne; and the University of Illinois Urbana-Champaign undertook a thorough examination of the Mott-to-metal transition in doped Sr327. They found that even a 1% substitution of lanthanum for strontium caused a marked drop in resistivity, and that when the substitution rate reached 4% the material had temperature-dependent conductivity characteristic of a metal.

To better understand these changes, the team investigated structural and electronic transformations by means of resonant x-ray scattering at the X-ray Science Division beamline 6-ID-B at the APS, and at the NSLS beamline X22C at Brookhaven National Laboratory, as well as neutron scattering at the Canadian Neutron Beam Centre, Chalk River Laboratories. (Both the APS and NSLS are Office of Science user facilities.)

These measurements allowed the researchers to determine the temperature below which antiferromagnetism set in as a function of the amount of lanthanum doping. This temperature fell fairly modestly at first, followed by a collapse of magnetic order at the point where the metallic state set in.

The electronic phase diagram (see the figure) summarizes the results of these measurements. The temperature below which the material is antiferromagnetic (black symbols) falls as lanthanum is added, until antiferromagnetism disappears completely when the substitution rate was 4%. The scattering studies also yielded a weak signal indicating the emergence of a structural superlattice that appeared below a critical temperature (red symbols), initially rose as doping increased, then stabilized once the material had become fully conducting.

The team conjectured that the loss and disappearance of the antiferromagnetic state in conjunction with the structural changes might be the result of a mixed state in which pockets of a new phase developed within the antiferromagnetic phase. To investigate this possibility, they conducted scanning tunneling spectroscopy on samples of Sr327 with doping fractions above and below the insulator-metal transition. These experiments diagnosed the material’s electronic structure with high spatial resolution, and showed that as the transition began, nanoscale “puddles” of a metallic phase appeared as isolated regions within the insulating phase. The hatched area in the figure indicates this mixed phase.

The presence of the metallic regions reduces the resistivity and magnetization of doped Sr327, in line with the bulk measurements. The transition to a fully metallic state seems to occur via a gradual connecting up of the puddles, followed by a first-order transition into a uniform metallic phase occurring at the critical value of the doping fraction. The continuing presence of a signal due to the superlattice suggests that the metallic state retains some electronic ordering that can be regarded as a vestige of the original antiferromagnetic Mott insulator phase. Further research is needed to determine if incipient lattice distortion at the onset of the metallic state is of structural origin or is a consequence of competing electronic instability, the team says.

This work was supported in part by National Science Foundation (NSF) CAREER Award No. DMR-1056625 (S.D.W.). This work was supported by the Materials Research Science & Engineering Center Program of the National Science Foundation under Award No. DMR 1121053 (T.H.). Partial support given by the U.S. Department of Energy (DOE)-Basic Energy Sciences, Materials Sciences and Engineering Division (T.Z.W.). Scanning tunneling microscopy work (V.M. and D.W.) was supported by the NSF Grant No. DMR-1305647. Work at Brookhaven National Laboratory and the NSLS was supported by the U.S. Department of Energy Office of Science-Basic Energy Sciences, under Contract No. DE-AC02- 98CH10886. This research used resources of the Advanced Photon Source, a U.S. Department of Energy (DOE) Office of Science User Facility operated for the DOE Office of Science by Argonne National Laboratory under contract no. DE-AC02-06CH11357.