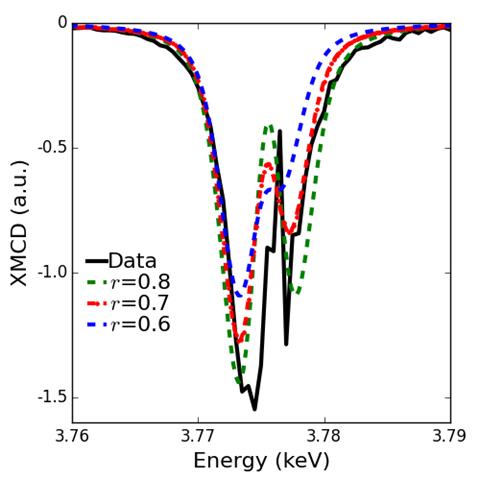 In school we learn how the periodic table organizes elements based on their electronic properties. Some elements, when coming together, hold their electrons close; others send them out to play. Since electron spins determine magnetic behavior, the degree of localization determines magnetic properties: For example, permanent magnets are strong because the 4f-electrons of their rare-earth metals are closely bound to their nucleus. But some important elements, such as those in the actinide series involving 5f electrons, do not always follow the rules. Plutonium (Pu) is one of these elements—perhaps the most complex—where electrons are neither fully localized nor delocalized; this identity crisis produces a record high number of distinct forms of Pu with different crystal structures and densities, making it the most complex elemental metal in the periodic table.

Despite six decades of research, Pu is still not completely understood. Now, scientists are closing in on an answer. Researchers in labs and universities in the United States and Germany used detailed x-ray measurements carried out at the U.S. Department of Energy’s Advanced Photon Source (APS) to identify behaviors and interactions for some of Pu’s most elusive electrons in the material plutonium-antimony (PuSb). The techniques used here provide a rigorous test to electron theories, and the results helped the researchers unravel the complexity of this system, and in the future, will help to demystify others like it.

The instability of plutonium’s nucleus is what allows it to undergo fission, but unknown to most people, including many scientists, is the fact that the electrons surrounding the Pu nucleus are equally unstable, and turn Pu metal in a material with complex properties.Plutonium possesses electrons that, like adolescent children, exist at a volatile transition between holding tight to the parent nucleus, and straying to form associations elsewhere. The energy differences between nearby electron energy levels are very low, so Pu’s electrons flit from one configuration to another. Add in Pu’s reactivity and tendency to radioactively decompose, and you have a material that is very difficult to study.

When seeking a moving target it helps to start at its extremes. The researchers in this study, from Los Alamos National Laboratory, Argonne National Laboratory, Northern Illinois University, and the Institute for Transuranium Elements (Germany) focused on PuSb, a material in which the Pu electrons stay “at home” around the nucleus as much as possible. In the world of fluctuating Pu electrons, these are the least likely to sneak out, or at least, this is the prediction.

One of the reasons that progress on the understanding of Pu has been slow is that Pu is not only radioactive but also highly toxic and requires special safety measures during experiments such as triple encapsulation of the investigated Pu material. This is why the high intensity and brilliance of the synchrotron light generated by the APS was critical to these experiments because APS x-rays could penetrate the required safety encapsulation at the relatively low x-ray energy of Pu M-edges (3.7-3.9 keV).

This work represents the first direct measurements of these individual electron features, which are required to fully describe the ground state of valence electrons in PuSb, and provides a rigorous test to electron theories.

These results also provide correlations that will help researchers to quantify complex electron behaviors in the future. For example, the research team discovered that the shape of the M-edge spectra is a useful way to classify how localized the electrons of Pu really are.

Plutonium continues to be a crucial element. The decay of its nucleus produces heat, and its capacity to self-generate a nuclear reaction made it a material of choice for nuclear weapons during World War II and later. Today, plutonium continues to power the Cassini space probe, after first beginning its mission to Saturn in 1997. It was only a few years ago that scientists made important discoveries regarding Pu’s nuclear fingerprint. Now, a detailed understanding of Pu electrons will help researchers to better and more safely exploit the material’s physical, chemical, and mechanical properties relevant to its use in weapons, space discovery, and nuclear energy and safeguards.  — Marc Janoschek and Jenny Morber

Work at Los Alamos National Laboratory (LANL) was performed under the auspices of the U.S. Department of Energy (DOE)-Basic Energy Sciences, Division of Materials Sciences and Engineering, and funded in part by the LANL Directed Research and Development program. The theoretical work by J.F.R. and M.v.V. was supported by DOE-BES under Award No. DEFG02-03ER46097. G.H.L. thanks the Seaborg Institute at LANL for support. This research used resources of the Advanced Photon Source, a U.S. DOE Office of Science User Facility operated for the DOE Office of Science by Argonne National Laboratory under Contract No. DE-AC02-06CH11357.