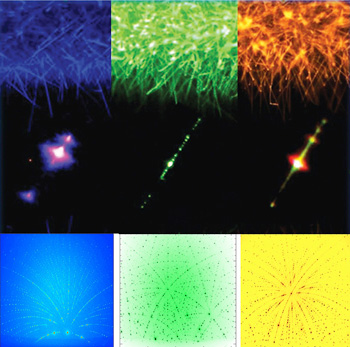 As the world moves away from incandescent light bulbs, light-emitting diodes (LEDs) are growing in popularity. They use significantly less energy and have far longer lifetimes than do the traditional incandescent bulbs, which are being phased out, and they don't contain mercury, as do compact fluorescents. LEDs do have a drawback, however. The phosphors that convert the single color produced by an LED into white light tend to produce a cool, bluish glow instead of the warmer, yellower color most people prefer.

Now scientists from Argonne National Laboratory, Oak Ridge National Laboratory, and the University of Georgia are developing new compounds to create nanoribbons that luminesce in different colors, which they can mix together to make a phosphor that provides a more desirable white light that can be tailored for different uses. Using high-brightness x-rays at several different beamlines at the U.S. Department of Energy Office of Science's Advanced Photon Source (APS), they are figuring out how atoms in the materials are arranged. A better understanding of these crystal structures will help them fine-tune their nanoribbons and make more appealing white phosphors based on LEDs.

The materials combine the rare-earth element europium with aluminum oxide to form europium aluminate nanoribbons. Powders of europium oxide (Eu2O3) and aluminum oxide (Al2O3) were mixed together with graphite powder and heated in a vacuum chamber to temperatures above 1000° C. Powders heated to between 1200° and 1400° C formed nanoribbons that luminesced orange. Those heated to 1000° to 1200° glowed green. When more aluminum oxide powder was added and the pressure in the vacuum chamber was raised, from 5 Torr to between 10 and 15 Torr, the resulting nanoribbons shone blue.

It is rare, the researchers say, for a single material to be able to cover the spectrum of visible colors, but it could simplify the creation of phosphors that produce desirable colors when excited by a blue or ultraviolet LED. Scientists would simply have to select the right mix of nanoribbons to get the white light they sought. In a separate experiment, the researchers also produced yellow and red luminescent nanoribbons by adding barium to the europium aluminate.

The researchers first used conventional x-ray powder diffraction to determine the crystal structures of the three types of nanoribbon. They compared the patterns they found to several diffraction databases of known materials and discovered the green nanoribbon was a match for strontium aluminate, so they knew it had a similar crystalline shape.

There was no match for the other two types, though, so they turned to the X-ray Science Division (XSD) beamline 11-BM-B at the Argonne Advanced Photon Source to perform high-resolution synchrotron powder diffraction using a single x-ray energy, which provides initial measurements of the spacings between the atomic planes of the crystal. Using a different scattering technique with a wide range of x-ray energies, XSD beamline 34-1D-E, also at the APS, gave them more detailed information, such as the exact angles between different atomic planes and the presence of crystal defects.

Using XSD beamline 20-BM-B at the APS, they performed x-ray absorption near-edge structure measurements, which focused on europium fluorescence and confirmed that the nanoribbons are indeed europium aluminates, and provided their chemical formulas — EuAl6O10 for the blue and EuAl2O4 for the green and orange. The blue nanoribbons, therefore, are a newly discovered compound. While green photoluminescence at room temperature had been seen before from SrAl2O4, the orange color was new as well.

Specifically pinning down the complete atomic structure of the crystal and tying it to the observed behavior of the material is a complex undertaking. The team now has an average picture of the local spatial arrangement of the elements and the oxygen vacancies — areas where a missing oxygen atom affects the electrical behavior of the material. They are now trying to refine that picture using the ChemMatCARS 15-ID-B advanced crystallography beamline at the APS to give theorists enough information to explain cause and effect and suggest possible ways to tweak the materials' luminescence properties.

The researchers also found a result they had not been looking for. They discovered that when they hit an individual nanoribbon with a microfocused x-ray beam, it not only produced the x-ray diffraction patterns they were using for their measurements, but also generated strong visible light emission. That light appeared not only at the spot where the beam struck, but also at the ends of the ribbons, showing the ribbons were acting as waveguides. That ability to route light of different colors means the nanoribbons may help in the creation of circuits inside optical devices, which use light beams to perform their functions.

Z.W.P. acknowledges funding support from the National Science Foundation (CAREER DMR-0955908). J.D.B. and J.Z.T. were supported by the Materials Sciences and Engineering Division, Basic Energy Sciences (BES), U.S. Department of Energy (DOE). APS sector 20, which is managed by XSD in partnership with the Canadian Light Source (CLS), is funded by the U.S. Department of Energy Office of Science, and by the Natural Sciences and Engineering Research Council of Canada and the University of Washington via the CLS. The 15-ID-B beamline at the APS is operated by ChemMatCARS and funded by the National Science Foundation. Use of the Advanced Photon Source at Argonne National Laboratory was supported by the U.S. Department of Energy Office of Science under Contract no. DE-AC02-06CH11357.

The Advanced Photon Source at Argonne National Laboratory is one of five national synchrotron radiation light sources supported by the U.S. Department of Energy’s Office of Science to carry out applied and basic research to understand, predict, and ultimately control matter and energy at the electronic, atomic, and molecular levels, provide the foundations for new energy technologies, and support DOE missions in energy, environment, and national security. To learn more about the Office of Science x-ray user facilities, visit http://science.energy.gov/user-facilities/basic-energy-sciences/.