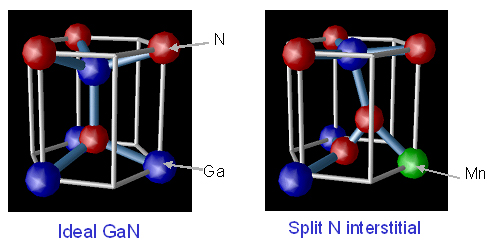 Semiconductors doped with magnetic elements are very interesting materials. In these materials, the magnetic impurities interact with and induce magnetism in the semiconductor host. Thus, they have the potential for combining magnetism with the rich electronic behavior of semiconductors, which may lead to new generations of low-power-consumption electronics, non-volatile memories, and field-configurable logic devices. Gallium nitride doped with Mn is particularly interesting because it is one of the few materials for which magnetism above room temperature has been reported, making it a candidate room-temperature magnetic semiconductor.

However, both the structure and the mechanism by which this material orders magnetically are poorly understood. In all magnetic semiconductors, structural defects intrinsic to the host or induced by the magnetic impurities can influence both the lattice sites occupied by the dopants as well as the strength of their interactions with the host. Researchers from the U.S. Department of Energy's Argonne National Laboratory, and the University of Wisconsin-Milwaukee have recently used polarized xray absorption techniques combined with theoretical calculations at X-ray Operations and Research beamline 4-ID-C at the APS to probe the electronic structure and the role of structural defects in Mn-doped GaN films grown by molecular beam epitaxy. The group found that the Mn exists in two distinct sites, and that there is a magnetic moment induced on the GaN that is opposite to that expected from calculations based on ideal GaN. Calculations of the x-ray spectra based on more realistic structures (including defects) show that the two-site nature of the Mn spectra as well as the GaN moment can be reproduced consistently if the Mn preferentially binds to a certain type of Nitrogen defect: a so-called split N interstitial, in which two N atoms occupy a single N site in the lattice, as shown in the figure. These results show that defect sites play a very critical role in where the Mn goes in the lattice, and subsequently have a strong effect on how the material orders magnetically.