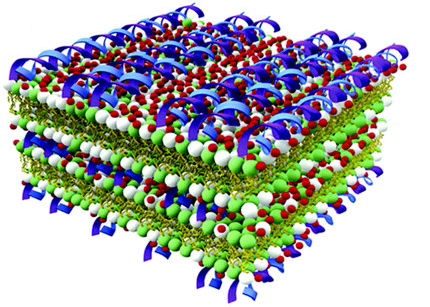 CHAMPAIGN, Ill. – Scientists studying the structure and interaction of negatively charged lipids and DNA molecules have created a “cookbook” for a class of nontoxic DNA delivery systems that will assist doctors and clinicians in the safe and effective delivery of genetic medicine.

As reported in the Aug. 9 issue of the Proceedings of the National Academy of Sciences, researchers have now performed a careful, comprehensive study to see how negatively charged lipids stick to negatively charged DNA and self-organize into structures.

“Many research groups have made concoctions with ingredients in different proportions and then assessed their effectiveness in gene delivery, but this is hard and requires a lot of intuition,” said Gerard Wong, a professor of materials science and engineering, of physics, and of bioengineering at the University of Illinois at Urbana-Champaign, and corresponding author of the paper.

“By understanding some of the physics, we now have recipes for assembling delivery systems with different structures, which can have intrinsically different, controllable DNA delivery efficiencies,” Wong said. “We found that the same family of structures are generated for many different ions.”

Gene therapy is one of the most promising strategies for developing cures for many hereditary and acquired diseases. Protocols have been approved for treating cancer, cystic fibrosis and neuromuscular disorders, for example, but delivering DNA to the proper location and getting the right amount of DNA expression without killing innocent cells has become the Achilles’ heel in DNA delivery.

At low membrane charge densities, for example, anionic lipids and DNA molecules self-assemble into structures with alternating layers of DNA and anionic membranes bound together by cations, Wong said. At high membrane charge densities, there is a surprise: The DNA is expelled, leaving a stack of anionic membranes glued together by cations – a feature that could prove useful in other controlled drug delivery applications.

The researchers also produced inverted hexagonal structures with encapsulated DNA. “First, the strands of DNA are coated with positively charged ions,” Wong said. “The strands are then wrapped with negatively charged lipids and resemble tubes, which are then grouped into hexagonal arrangements.”

Utilizing naturally occurring anionic lipids instead of cationic lipids “creates a whole hierarchy of interactions and a much richer range of structures,” Wong said, “which really opens up new possibilities.”

The U.S. Department of Energy and the National Science Foundation funded the work.

The original news release can be found here.