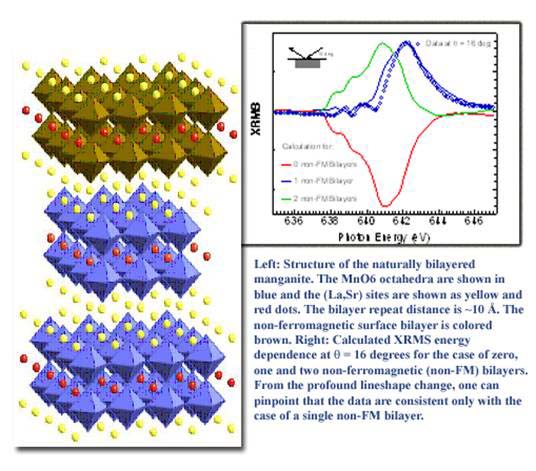 Researchers from Argonne National Laboratory have successfully demonstrated that an insulating nanoskin (an ultrathin insulating, non-ferromagnetic tunnel barrier layer) in contact with a completely ferromagnetic metallic layer can be naturally created. Assembling a uniform layer five atoms thick (10 Å) and without defects is no mean feat. In their Nature Materials paper, the researchers note that situating a well-defined surface insulator atop a fully spin-polarized bulk demonstrates that two of the most demanding components of an ideal magnetic tunnel junction can self-assemble naturally.

These experiments, which were carried out at the X-ray Operations and Research 4-ID-C beamline at the Advanced Photon Source, relate to the field of spintronics (or spin electronics), which uses the spin of the electron as well as its charge to process information, rather than the traditional use of only the electron’s charge..

Spintronics promises technological advances in computational power, energy savings, and convenience by creating low-power electronics and non-volatile memory elements. A critical requirement for spintronic devices is a high degree of spin polarization, which is often negated by conflicting interactions brought on by physical and chemical properties of surfaces and interfaces. Promising candidates with high degrees of spin polarization are half-metallic ferromagnets. Unfortunately, in most magnetic oxide systems studied, the surface spin polarization decreases rapidly with temperature, becoming too small for practical use even well below the ferromagnetic ordering temperature (what is commonly called the Curie temperature point).

However, in the naturally-layered manganites (La2-2xSr1+2xMn2O7, where La is the symbol abbreviation for lanthanum, Sr for strontium, Mn for manganese, and O for oxygen), the researchers found that the outermost manganese-oxide bilayer, alone, is affected. This intrinsic nanoskin is an insulator with no long-range ferromagnetic order, while the next bilayer displays the full bulk spin polarization up to very near the Curie point. Thus, the data from the group’s experiments clearly show the presence of an extremely thin non-magnetic nanoskin on top of subsequent bilayers that are fully magnetized.

“It is the weak electronic and magnetic coupling between bilayers that is the key to initiating a new and revolutionary pathway to study ideal spintronic devices,” notes group member and coauthor John Freeland (ANL/XFD). “Using nanoskins on layered manganites provides exciting new possibilities for making technologically-advanced electronics.” — William Arthur Atkins