Seventeenth-Century Islamic Brassmakers Were Far Ahead of European Peers 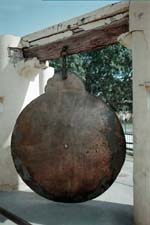 Manufacturers of brass astrolabes in 17th-century India were two centuries more advanced than their European peers, says a doctoral student at Lehigh University who just completed a four-year study of astrolabes.

Brian Newbury, who earned a Ph.D. in materials science and engineering in May, said the high zinc content in astrolabes fabricated in Lahore (now in Pakistan) proves that brass made there in the early 1600s was produced by a co-melting technique that was not developed in Europe until the 19th century.

Astrolabes - ornately engraved instruments consisting of thin metal discs stacked on top of each another - were designed to do astronomical calculations, tell time, perform surveying tasks, and determine distances and direction on land. They were used in the Islamic world from 700 A.D. to the mid-19th century and in Europe from 1000 A.D. to the mid-17th century.

Newbury measured the astrolabes' alloy composition by performing x-ray diffraction, x-ray fluorescence and x-ray radiography experiments on 40 astrolabes at the Advanced Photon Source Synchrotron at Argonne National Laboratories in Chicago. He is based in Lehigh's Archaeometallurgy Laboratory, which analyzes archaeological and historic metal artifacts.

The Synchrotron's x-ray diffraction equipment focuses a beam of light one trillion times brighter than conventional x-rays, enabling scientists to determine the bulk (interior) composition of an artifact without the cutting and polishing required by standard analysis techniques, which decreases its artistic value.

Newbury's study, which was funded by Argonne and by Chicago's Adler Planetarium and Astronomy Museum, is one of the first to use the nondestructive x-ray diffraction technique to analyze historic metal artifacts.

He presented his results at the British Museum in London in April, at Argonne on May 4 and at the Adler Planetarium on May 5.

"A practical limitation of the cementation process is that the maximum zinc composition is approximately 32 weight percent zinc due to the thermodynamics of the reaction," Newbury wrote in an article published in 2004 by the journal Powder Diffraction.

"Brass compositions [of 39-45 weight percent zinc] could only have been manufactured by co-melting of metallic zinc and copper."

Cementation, a brass-making technique developed by the ancient Romans, is a more complicated fabrication method than co-melting, says Newbury. Zinc ore is placed in a crucible along with copper metal and charcoal. The mixture is heated until the carbon from the charcoal reduces the zinc oxide to zinc gas and carbon-dioxide. The zinc gas can then be diffused into the solid copper, but at concentrations no higher than 32 weight percent zinc.

Sheet brass made by cementation requires many cycles of working and annealing, which is the process of heating the metal to relieve the internal stress that results from pounding (working) it into its desired shape and thickness.

"To produce the thin brass sheets of an astrolabe is very time-consuming," says Newbury. "An astrolabe plate measuring 1 mm in thickness would require at least five cycles of working and annealing from the approximately 1 cm thick brass plate that the metalworker would have as raw material."

Metalworkers who make brass by co-melting first produce zinc metal and then melt it and copper together to form brass. This method enables craftsmen to tailor the alloy to achieve the desired percentage of zinc and copper.

Brass made from co-melting is heated to its "hot-deformation temperature," says Newbury - hot enough so it can be shaped freely without fear of cracking but not so hot that it melts. It can then be deformed into its desired shape and thickness in one cycle.

"Above 35 percent zinc, brass is harder and easier to cut. This makes it easier to engrave - a characteristic which allowed the astrolabe makers of Lahore to engrave finer details and produce a more accurate instrument."

Scientists believe that zinc metal was produced in India for several centuries before the 1600s - mostly, they think, so it could be re-oxidized and used to make medicinal salves.

"There is evidence that metallic zinc was being produced in Zawar [in northwest India] as early as the 13th century," says Newbury, "but we're not completely sure what it was used for.

"Our work at the APS Synchrotron has produced the first data suggesting that use of metallic zinc in brass production have been well-established by 1600."

In addition to using x-ray diffraction to determine the bulk composition of the brass in the astrolabes, Newbury used x-ray fluorescence, the standard tool for analyzing archaeological artifacts, to measure the brass's surface composition.

He found the zinc content significantly higher in the bulk than on the surface, and he attributes the difference to the zinc volatility that heating induces in brass.

"Zinc in brass is very volatile. When the brass is heated, the zinc diffuses out of the surface. Annealing for long periods of time especially causes a great deal of surface zinc loss."

Newbury hopes to learn more about the history of metalworking on the Indian subcontinent by studying thin bowls, serving plates and other artifacts made of thin sheet-formed brass.

He has been advised in his Ph.D. studies by Michael Notis, professor of materials science and engineering at Lehigh and a world-renowned archaeometallurgist.