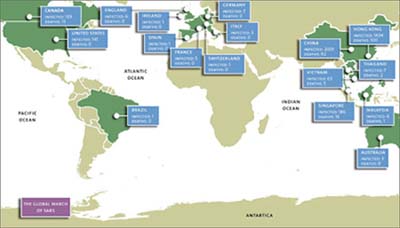 A prototype drug created by researchers at the University of Illinois at Chicago shows promise in slowing replication of the virus responsible for severe acute respiratory syndrome, or SARS.

Currently, there are no effective antiviral agents or vaccines for SARS, which killed almost 800 people in an epidemic in 2002-2003.

On the basis of their success, the researchers have received an $8 million grant from the National Institute of Allergy and Infectious Diseases to develop protease inhibitors that would block key enzymes in the SARS virus and hamper its advance. Protease inhibitors, a class of drugs capable of disrupting enzymes that digest proteins, have been successfully used to thwart the human immunodeficiency virus, which causes AIDS.

"Data from SARS patients indicate that replication of the virus peaks 10 days after the onset of fever," said Michael Johnson, director of the Center for Pharmaceutical Biotechnology in the UIC College of Pharmacy and the study's principal investigator. "By administering protease inhibitors early, when feverish symptoms have started, the drugs could reduce the viral load and ameliorate the disease."

Like HIV, the SARS virus multiplies rapidly, hijacking the machinery of the cells it infects to clone itself over and over again.

One of the first steps in that process is the production of a long chain of proteins, all of which are needed for the virus to propagate. Two enzymes, or proteases, clip the chain to release the individual proteins, the parts needed to assemble a mature virus.

These two proteases -- called 3CLpro and PLpro -- are UIC's targets for drug therapy.

"If we can block 3CLpro and probably PLpro, then we can stop the SARS virus from replicating," Johnson said.

Under the grant, Andrew Mesecar, associate professor of pharmacy, will study details of the three-dimensional structure of the two enzymes using x-ray crystallography.

His technique involves bombarding a crystalline form of the enzymes with an intense beam of x-rays generated by a multimillion-dollar instrument at the Advanced Photon Source at Argonne National Laboratory. As the x-rays are bent, or diffracted, by molecular components, they create a pattern on an ultra-high-resolution x-ray camera. Computers then mathematically interpret the pattern to reconstruct the enzyme's molecular configuration atom by atom.

The detailed structures will reveal the precise locations and chemical properties of pockets where the enzymes bind the SARS virus's long protein chain.

This information will help Arun Ghosh, professor of chemistry at UIC, build protease inhibitors, like the prototype he assembled earlier, through what is called structure-based drug design. He will create computer images of each enzyme coupled with compounds anticipated to obstruct the pockets, revealing whether and how tightly the molecules fit in the space. If the fit is poor, he can explore a library of alternative molecules that might meet the chemical and configurational requirements.

Ghosh will then assemble the molecules that appear to work, as if the chemicals were the sticks and spools of a Tinkertoy, to create a potential drug.

Crucial to the endeavor is Ghosh's strategy of targeting not the sidechains of the proteases, but their backbones. When viruses mutate, as they frequently do, thwarting the action of drugs, the mutations typically occur in these sidechains.

"By targeting the backbone, we create a drug that the virus probably will not be able to evade," Johnson said.

Susan Baker, a professor of microbiology and immunology at Loyola University Stritch School of Medicine who is collaborating in the research, will test the newly developed protease inhibitors to determine whether and how quickly they slow the enzymes' activity inside living cells.

The prototype drug developed earlier by Ghosh, an inhibitor of 3CLpro, was an improvement on a design published in the scientific literature. Shipped to the Centers for Disease Control and Prevention for testing on a live virus, the prototype proved to be 1,000 times more effective than the original compound in inhibiting 3CLpro.

However, Johnson, said, the prototype drug blocked several, but not all, of the enzyme's pockets. "The goal is to create compounds that will block all possible binding sites in the proteases to put them out of business."

"A compound that blocks all these sites, rather than just a few, and that conforms tightly to the pockets, is ultimately a better drug for human consumption because it can be prescribed in smaller doses."

Johnson emphasized that all the work being done at UIC involves isolated proteases, not live viruses. "The proteases are no more dangerous than the enzymes in your laundry detergent," he said.

Testing of the protease inhibitors on live viruses will be done at the laboratories established by the National Institutes of Health.

SARS was first reported in Guangdong Province, China in November 2002 and spread rapidly to other Asian countries, North America and Europe. By July of the following year, more than 8,000 cases were reported in 26 countries on five continents, resulting in 774 deaths and enormous economic damage.

For more information about the UIC College of Pharmacy, visit www.uic.edu/pharmacy.

UIC ranks among the nation's top 50 universities in federal research funding and is Chicago's largest university with 25,000 students, 12,000 faculty and staff, 15 colleges and the state's major public medical center. A hallmark of the campus is the Great Cities Commitment, through which UIC faculty, students and staff engage with community, corporate, foundation and government partners in hundreds of programs to improve the quality of life in metropolitan areas around the world.