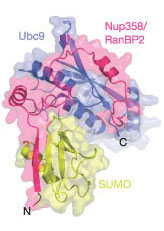 NEW YORK, June 1, 2005 - Scientists at Memorial Sloan-Kettering Cancer Center (MSKCC) have uncovered the structure of a network of proteins that help regulate the life cycle of cells. Understanding the network's physical layout is an important step toward learning its precise function, and in finding ways to correct flaws in the system that could lead to cancer.

Using x-ray crystallography, the researchers identified how one protein, a molecule called the Small Ubiquitin-related Modifier (SUMO-1), is connected or "conjugated" to another molecule within the complex. The findings, reported in the June 2, 2005, issue of Nature, offer the first complete look at the structure of these molecules as they are thought to exist in the cell.

"Understanding this process could be important in many physiological steps that are disrupted in cancer — including error-prone DNA replication, chromosome segregation, the cell's response to stress, and normal signaling reactions," said Christopher Lima, PhD, a structural biologist at the Sloan-Kettering Institute and lead author of the study.

While there's no direct evidence that SUMO is important in cancer, research suggests that it is necessary for the normal assortment of chromosomes immediately before a cell splits. Yeast cells that lack SUMO cannot successfully divide, Dr. Lima noted.

Since cancer is characterized by cells dividing unchecked, proving SUMO's function could potentially yield novel anticancer therapies. "If sumoylation (when SUMO attaches to a protein) is promoting cell division, then inhibitors of SUMO may be a pretty good agent to block the cell cycle," said Dr. Lima.

Postdoctoral researcher David Reverter, PhD, collaborated with Dr. Lima on the work and is the first author on the Nature paper.

SUMO has been called a "mysterious cousin" of ubiquitin, a protein of increasing interest to cancer experts. The two molecules have remarkably similar structures, though they perform different tasks in cells.

Ubiquitin acts as a chemical tattoo that marks damaged or obsolete proteins for destruction by a protein complex in the cell called the proteasome. Cancer researchers became particularly interested in ubiquitin with the discovery that it tags and regulates many cell-cycle proteins for destruction. One of these proteins is p53, a "tumor suppressor" that, when working properly, can prevent runaway cell growth.

In normal cells ubiquitin marks p53 for destruction. But in cells with damaged DNA, p53 evades getting tagged with ubiquitin to allow its accumulation, thus enabling the p53 suppressor protein to stifle the formation of tumors.

Three scientists — two Israelis and an American — were awarded the 2004 Nobel Prize in Chemistry for their work showing that ubiquitin marks other proteins for destruction.

SUMO-1 does not appear to label other proteins for destruction. It instead appears to alter their function in different ways, perhaps even by preventing ubiquitin tagging. Still, there are enough similarities between conjugation of SUMO and ubiquitin that the latest findings could help researchers understand both. "The structural network has revealed a mechanism that may be important in the regulation process in the SUMO and ubiquitin pathways; pathways that need to operate properly for normal cell division," Dr. Lima said.

The complex described by Drs. Lima and Reverter includes SUMO-1, a substrate, and two other proteins, called E2 and E3. E2 links SUMO to target molecules, while E3 is a kind of chemical marriage broker, bringing targets close enough to SUMO to facilitate binding.

"E3 activities are somewhat mysterious," Dr. Lima said. "They stimulate conjugation, but how they do so remains unclear. A major advance in this study was the development of quantitative assays that allowed us to develop a more sophisticated model for E3 activity," Dr. Lima said. "This model has broad implications for the function of E3s in all ubiquitin and ubiquitin-like conjugation."

Dr. Nikola Pavletich, Chairman of the Structural Biology program at the Sloan-Kettering Institute, and an expert in ubiquitin, said the latest work "has given us a new view and a detailed understanding" of the process of sumoylation and should lead to a better grasp of SUMO and ubiquitin. "Identifying the additional roles of sumoylation may well provide us with new targets to inhibit the protein and therapeutic agents for cancer and other conditions in which SUMO is involved."

The study also casts light on a poorly understood aspect of cellular communication. The MSKCC researchers believe the protein complex they have observed is assembled at nuclear pore complexes, portals that connect the nucleus with the cytoplasm beyond. These conduits permit the transfer of information both to and from the nucleus, and are vital to proper cell function.

"The next step in this research is to probe the importance of the contacts observed in our structure with the biochemical activities and effects on the cell itself of disrupting these contacts," Dr. Lima said. He and his colleagues are now studying these interactions in yeast.

Funding for the research came from the National Institutes of Health and the Rita Allen Foundation.

Memorial Sloan-Kettering Cancer Center is the world's oldest and largest institution devoted to prevention, patient care, research and education in cancer. Our scientists and clinicians generate innovative approaches to better understand, diagnose and treat cancer. Our specialists are leaders in biomedical research and in translating the latest research to advance the standard of cancer care worldwide.

The original version of this press release can be viewed at https://www.mskcc.org/mskcc/html/57679.cfm

Data was collected at the SGX Collaborative Access Team beamline facilities at Sector 31 of the Advanced Photon Source (APS) at Argonne National Laboratory - funded by the U.S. Department of Energy's Office of Science. - lightsources.org]