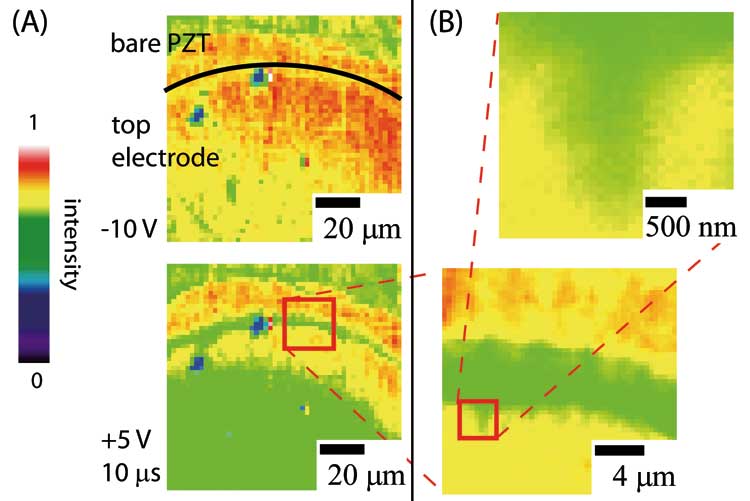 "X-rays penetrate right through materials, so we can look deep inside electronic devices," says Eric Isaacs, former Bell Labs researcher, now director of Argonne's Center for Nanoscale Materials and a collaborator in the research. "Here we are studying materials in a realistic structure, not contrived devices suited to a particular probe."

Polarization fatigue is a well known problem in ferroelectric capacitor technology. In this case, the effect is believed to stem from migration of oxygen atoms to the electrode region. This, in turn, leads to formation of oxygen vacancies which can pin polarization domain walls and inhibit switching. Another mechanism involves the formation of a layer near the electrode interface that reduces the total electric field in the ferroelectric material and shuts down its ability to reverse polarization. Either way, the proposed mechanisms appear to be microscopic in nature, and so to study them in detail a precise high-resolution structural analysis tool is required. X-ray microdiffraction can image the evolution of polarization domains in buried ferroelectric thin films during switching with submicrometer resolution.

The ferroelectric devices were made in the University of Wisconsin group of Chang-Beom Eom by first depositing an SrRuO3bottom electrode on an insulating SrTiO3 substrate. Epitaxial PbZr1-xTixO3 (PZT) films with a nominal composition x = 0.55 and thicknesses of 80 or 160 nm were grown on top of the electrodes by radio frequency sputtering, followed by a top electrode layer consisting of sputtered polycrystalline platinum. A beam of 10 keV x-rays from the MHATT/XOR facility at beamline 7-ID of the APS were focused onto a 0.8-m spot on this ferroelectric structure, and the diffracted x-rays were detected using conventional x-ray diffraction techniques. Images of the stored polarization with the ferroelectric layer were obtained by scanning the x-ray beam across the device. An advantage of this configuration is that electrical measurements can be made in situ during x-ray diffraction experiments. As a baseline, diffraction images were collected for each of the two stable polarization states, which established that x-ray microdiffraction was an accurate probe of the ferroelectric behavior.

The results of this study showed that polarization fatigue was qualitatively different when the switching was driven by lower-amplitude electric-field pulses (0.625 MV per cm peak) switching versus higher field pulses (1.2 MV per cm peak). Fatigue was observed in both regimes as the polarization-field hysteresis loops collapsed after repeated cycling with triangle wave pulses at 1 kHz. Low electric field fatigue was observed within 104 pulses as the PZT layer structure became pinned into an unswitchable state, which could be restored by exposure to higher field pulses.

A different process was found for fatigue induced by high field pulses. Although the onset of fatigue occurred after a much higher number of electric field cycles, the decrease in switchable polarization and the structural changes were more dramatic and irreversible. The x-ray microdiffraction images showed that isolated regions of severely decreased x-ray scattering intensity begin to form and that these eventually coalesce to encompass the entire region under the electrodes. The diffraction data indicate that there is a drastic loss of structural order as the fatigue progresses to failure of the device. "These are not things you can tell just from an electrical measurement," says collaborator Paul Evans of the University of Wisconsin. "There seem to be two sets of mechanisms in the low-field versus the high-field fatigue, and we can distinguish them by probing the structure with x-rays."

These measurements, made possible by the high brightness of the third generation synchrotron at the Advanced Photon Source, confirm that several mechanisms may be at play during fatigue and failure of ferroelectric devices. According to Evans, the results also indicate that x-ray microdiffraction is an ideal tool for high resolution studies of structural changes in thin film devices under a wide range of conditions, especially when structural and electronic phenomena are deeply enmeshed. "Microdiffraction is one of the killer applications for third generation synchrotrons such as APS." David Voss

This work was supported by the National Science Foundation through the University of Wisconsin Materials Research Science and Engineering Center (grant number DMR-0079983) and grant no. DMR- 0313764 (C.B.E.). E.D. acknowledges support from the U.S. Department of Energy (grant numbers DE-FG02-03ER46023 and DEFG02- 00ER15031) and from the NSF FOCUS physics frontier centre. Use of the Advanced Photon Source was supported by the U.S. Department of Energy, Office of Science, Office of Basic Energy Sciences under Contract no. W-31-109-ENG-38).