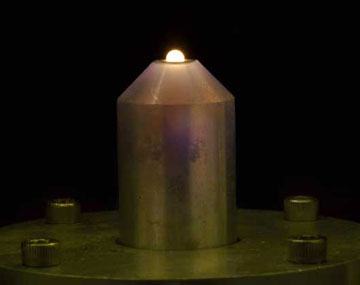 The transport properties of high-temperature oxide melts are of considerable interest for a variety of applications, including modeling the Earth's mantle, optimizing aluminum production, confining nuclear waste, and investigating the use of aluminum in aerospace propulsion. Information on melt viscosities and the speed of sound through liquid oxides is essential for testing the validity of theories used in predicting the geophysical behavior of the Earth's mantle as well as mathematical models of aluminum combustion. The experimental techniques described here supply fundamental insights into the behavior of liquid oxides that help provide a basis for these and other advanced applications.

Kinematic restrictions on neutron scattering make it impossible to reach acoustic modes in liquid oxides, and the high-temperature regime is inaccessible by light scattering because of black body radiation. Another factor making it difficult to obtain data on microscopic transport properties with conventional techniques is the chemical reactivity of oxide melts at high temperatures. Aluminum oxide, for example, melts at about 2327K and is an exceptionally aggressive material in the liquid state, which precludes the use of traditional containers for the material while measurements are being made.

Researchers from three French research centers, Centre de la Recherche sur la Matière Divisée, Institut de Science et de Génie des Materiaux et Procédés, and Centre de la Recherche sur la Matériaux à Haute Température; Spain's University of the Basque Country; and from Argonne sought to circumvent these limitations by studying molten aluminum oxide using high-resolution inelastic x-ray scattering (IXS) at X-ray Operations and Research beamline 3-ID-C at the APS. The measurements were performed in a containerless environment. Aluminum oxide spheres 3 to 4 mm in diameter were suspended in an oxygen gas jet and heated with a 270-W CO2 laser beam to temperatures between 2300 and 3100K. A carefully adjusted gas flow through a conical nozzle maintained the levitated sample at a position that was stable to within ±20 µm above the plane of the top edge of the nozzle, allowing a clear path for the incident and diffracted x-ray beams. Sample temperature was measured by a pyrometer directed at the point illuminated by the x-ray beam.

The excitation spectra showed a well-defined triplet peak structure at lower Q values (1 to 6 nm-1) (Fig. 1) and a single quasi-elastic peak at higher Q. The high-Q spectra were well described by kinetic theory, but the low-Q spectra diverged significantly from predictions based on hydrodynamic theory. When the IXS spectra measured at the lowest six wave vectors at 2323K were fit to the hydrodynamic equation for the scattering function, it was found unexpectedly that the Brillouin modes remained underdamped out to Q=6 nm -1 (Fig. 2). Furthermore, the observed Brillouin line width increased with temperature, whereas it was expected that the viscosity would decrease in the hydrodynamic limit. Other discrepancies were discovered as well. The researchers found that an extension of hydrodynamic theory that allows for frequency dependence of the transport coefficients, such as the viscosity, yielded reasonable fits to the low-Q data up to 6.09 nm -1. This provides a description of the liquid dynamics in the relatively uncharted regions between hydrodynamics and kinetic theory (Fig. 3).

This work, and use of the Advanced Photon Source, was supported by the U.S. Department of Energy, Office of Science, under contract W-31-109-ENG-38; the CNRS, and the Universitié d' Orléans.