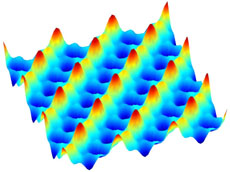 Coherent Bragg rod analyses (COBRA) experiments using synchrotron x-rays at Argonne's Advanced Photon Source (MHATT-CAT and PNC-CAT beamlines) directly revealed the sub-angstrom atomic interaction of epitaxial films with substrates. Information on how atoms in the adjoining layers of the film and substrate rearrange to mimic each other may lead to improvements in semiconductor manufacturing and the development of novel heterostructure materials, such as multilayer ferroelectrics, magnetic nanostructures and thin film superconductors.

The increasing use of epitaxial thin films in the manufacturing of semiconductor devices makes it essential to understand the atomic structures of these films and how they interface with underlying substrates. Epitaxial "passivation layers" can serve as a functional element in a device, as a means of modifying the electronic states in the lattice of the underlying layer, or simply as a barrier to protect the device from any sort of moisture and contamination. Other types of non-destructive methods have been previously employed to investigate various thin film characteristics, but their data had to be interpreted using models, which sometimes resulted in inaccurate conclusions.

Researchers at Argonne's Advanced Photon Source (APS) have developed a new direct method of determining the atomic structure of epitaxial thin films and how they interface with substrates on the atomic level. Projecting APS's extremely bright undulator x-ray radiation at selected thin films, the scientists conducted coherent Bragg rod analyses (COBRA) to determine both the amplitude and the phase of the diffracted x-rays. The COBRA method, developed by Yizhak Yacoby (Hebrew University, Jerusalem) in collaboration with Roy Clarke, Ron Pindak and Edward Stern, does not require any a priori assumptions about film structure or any special type of sample preparation.

This project revealed with unprecedented detail how the atoms in the first layer of a film rearrange to match with the positions of the underlying atoms at the top of the substrate. Similarly, in order to conform to the substrate atoms, the stacking order of the atoms in a film's atomic layers differ from those in the bulk structure. This work demonstrates that COBRA is effective in determining the 3D electron density of an epitaxial film and its interface with a substrate at a sub-angstrom resolution, while also offering a much greater amount of structural information than could previous types of x-ray imaging techniques. The highly efficient, non-invasive COBRA method also provides an electron density function that can be readily compared with many theoretical models of thin films. -Paul Boisvert (ANL-IPD)