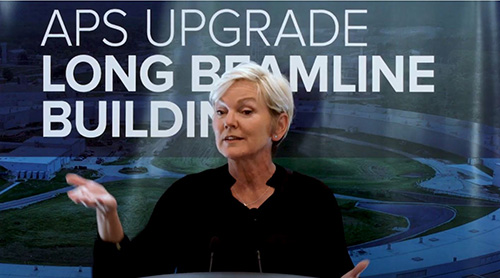 Paul Kearns, director of the U.S. Department of Energy’s Argonne National Laboratory, and members of the Argonne Advanced Photon Source team were delighted to welcome U.S. Department of Energy Secretary Jennifer M. Granholm; U.S. Congressmen Bobby Rush (D-IL) and Bill Foster (D-IL); and Illinois State Senators Diane Pappas (D-45th) and Sue Rezin (R-38th) to the ribbon cutting ceremony for the Long Beamline Building (LBB), which will be home to two of the new x-ray beamlines that are part of the $815 million upgrade of the Advanced Photon Source that is now underway.

This next generation of beamlines will be capable of providing high-resolution x-ray images of critical components and technologies from aircraft engines to solar cells to advanced materials for microelectronics, in clear detail and at impressively small scale.

The APS, one of the most productive x-ray light sources in the world, hosts more than 5,000 scientists from around the world in a typical year to conduct research in fields ranging from chemistry to life sciences to materials science to geology.

A short Argonne video of Secretary Granholm’s visit can be viewed here and A full-length article on the ceremony can be read here.