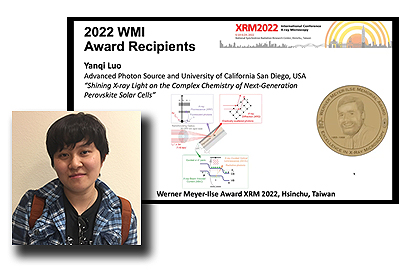 Yanqi (Grace) Luo, a postdoc in the X-ray Science Division (XSD) at the U.S. Department of Energy’s Advanced Photon Source at Argonne National Laboratory has been awarded the 2022 Werner Meyer-Ilse Memorial Award by the 2022 International Conference on X-ray Microscopy.

In his nominating letter to the award committee, Barry Lai, group leader of the XSD Microscopy Group where Luo is currently employed, lauded her “pioneering work in applying synchrotron-based x-ray microscopy to a new class of emerging material named perovskites during her Ph.D. research.

“In particular, she has revealed the composition-performance relationship in halide perovskite photovoltaic devices using x-ray microscopy. These materials are challenging to be characterized due to their rapid degradation under ambient conditions as well as intense irradiation from either x-rays or electron beams. Yanqi performed extensive scanning optimizations and also gained an understanding of the sample degradation mechanisms in these novel materials.

“In addition, Yanqi established a model to correct x-ray fluorescence data due to signal attenuation in halide perovskites that contain heavy absorbing metals such as Pb. With these developments, Yanqi performed the first systematic synchrotron-based nanoprobe x-ray fluorescence mapping of halide perovskites, enabling detailed studies of nanoscale composition in these materials.

“Importantly, she demonstrated that nanoscale variation in chemistry had a direct optoelectronic impact on perovskite absorber. Performing in situ nano-XRF on nanometer-thick bromine-based perovskite single crystals with an innovative sample fabrication method, Yanqi captured direct evidence of Bromine migration induced by electrical bias and the direction of halide migration aligned well with the enhanced photoluminescence intensity.

“Through her dedication to advancing the field of x-ray microscopy,” said XSD director Jonathan Lang, “Yanqi has proven to be an outstanding asset to the APS research program, and more importantly, to the scientists who use facilities like the APS while investigating important questions in materials science.”

The Werner Meyer-Ilse Memorial Award is given to young scientists for exceptional contributions to the advancement of x-ray microscopy through either outstanding technical developments or applications, as evidenced by their presentation at the biennial International Conference on x-ray Microscopy and supporting publications. Nominees are qualified if they have performed this work as part of a completed Ph.D. thesis during the two-year period prior to and including the conference, or are expected to receive their degree in the near future. Werner Meyer-Ilse was chair of the International Program Committee for XRM’99 and leader of the x-ray microscopy program at Lawrence Berkeley National Laboratory.  Werner died in a tragic automobile accident a few days before the 1999 conference. To honor his work and legacy the Werner Meyer-Ilse award was establish and awarded for the first time at XRM’99 at Berkeley, USA.