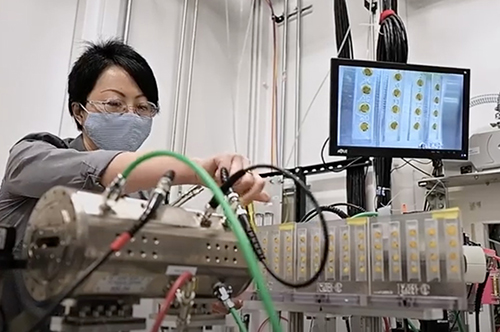 The Advanced Photon Source (APS) is one of the most productive x-ray light sources in the world. More than 5,500 scientists from around the world travel to the U.S. Department of Energy’s (DOE) Argonne National Laboratory in a typical year to use the ultrabright x-ray beams generated by this DOE Office of Science user facility.

For those who haven’t yet made the trip, this five-minute video offers an inside look at the APS, from the powerful accelerator at its heart to the beamlines where groundbreaking research is conducted. The video serves as an introduction to the facility and its work, and is perfect for users who haven’t been on campus, students, sponsors and other groups who would like to take a virtual tour from their homes or classrooms. It includes information on the in-progress APS Upgrade, which will increase the brightness of the x-ray beams generated at the APS by up to 500 times.

The video can be viewed (YouTube) or downloaded at the APS Media Center: 5-minute HD Video Tour of the Advanced Photon Source (645-MB mp4) (YouTube / Download).