Advanced Photon Source at the Heart of COVID-19 Research 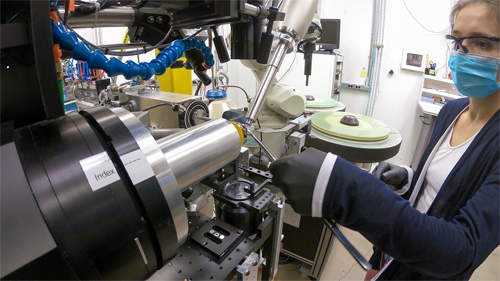 The original Argonne feature story by Andre Salles can be read here.

The more you know about an infectious virus, the more tools you will have to fight it. When it comes to the structure of the SARS-CoV-2 virus, which causes COVID-19, much of the world’s collected data comes from work performed at the Advanced Photon Source (APS), a U.S. Department of Energy (DOE) User Facility located at DOE’s Argonne National Laboratory.

As a user facility, the APS has made its ultrabright X-ray beams available to more than 70 research teams around the country since January, each team using the APS remotely or mailing in samples to be analyzed. The APS is so critical to the effort to combat the pandemic that it operated for 10 percent more hours this year than usual, with the additional time supported by the DOE Office of Science through the National Virtual Biotechnology Laboratory, with funding provided by the Coronavirus CARES Act.

Argonne’s own team of structural biologists has also been working around the clock since the COVID-19 outbreak began, using the APS to precisely determine the shape and structure of the proteins that make up the virus and laying the groundwork for drug treatments and vaccines.

The Argonne effort is led by Andrzej Joachimiak, director of the Structural Biology Center (SBC) at beamline 19-ID-D of the APS, funded by the DOE Office of Science Biological and Environmental Research program. Joachimiak, both of Argonne’s X-ray Science Division and the University of Chicago, is also a co-director of the Center for Structural Genomics of Infectious Diseases (CSGID), a consortium of biologists from around the country. The center was created in 2007 and funded by the National Institute of Allergy and Infectious Diseases (NIAID), part of the National Institutes of Health (NIH), to provide the world’s scientists with as much information as possible to combat human pathogens, emerging diseases and deadly outbreaks.

“The Center was founded 13 years ago, and the APS has been an important part of it since the beginning,” Joachimiak said. ​“An outbreak such as COVID-19 is exactly what the Center was created for. The virus is a complex system made up of at least 29 different proteins, and structural genomics will be the key to finding a treatment or a vaccine to curb this pandemic.”

In a recent letter published by the International Union of Crystallography, Joachimiak and his colleague Karolina Michalska, also of Argonne and the University of Chicago, detailed the contributions of the Center to the world’s knowledge of SARS-CoV-2. Those contributions began in January, when the genome of the virus became available.

“We called NIAID on January 10 and said get us the genome right away,” said Karla Satchell, a microbiologist at Northwestern University and co-director of the CSGID. ​“Fifteen days later we had put together a big platform. We wrote a white paper that said we would commit a huge amount of resources to address the disease.”

The APS immediately dedicated its biological research efforts to understanding SARS-CoV-2. As of November 2020, scientists using the APS have deposited 95 structures into the international Protein Data Bank, and CSGID scientists are responsible for more than half of that number, using the SBC and the Life Sciences Cooperative Access Team (LS-CAT) beamline at 21-ID at the APS, managed by Northwestern University.

“It has been amazing to see how everyone has stepped up to address the pandemic,” said Bob Fischetti, group leader with Argonne’s X-ray Science Division and life sciences advisor to the APS director. ​“The hard work, dedication and collaborative effort of the center scientists and many APS user groups has produced an enormous amount of information that researchers around the world can use to help find a cure for COVID-19.”

Joachimiak said his team is now focusing on solving structures of complexes with inhibitors, including various drug candidates that may stop the virus from attaching itself to human cells, or replicating itself. The latest such paper by Joachimiak’s team was published in July in the International Union of Crystallography Journal. Other sites in the center are working on vaccine candidates and antibodies, many using APS data to look for weaknesses in the virus’s defenses.

“We had a number of sites with different priorities, and we were able to move fast,” Satchell said. ​“Each site stepped up to do what they do well.”

In their letter, Joachimiak and Michalska also praised the rapid response, giving credit to technology developed over the past 10 years studying structures of infectious diseases. Light sources like the APS, they wrote, are set up for rapid-access single-crystal X-ray crystallography, which has come a long way in 20 years. The APS offers a full-service setup, with the ability to grow crystals from synthetic proteins (APS scientists do not work with the live virus), get them onto X-ray beamlines and have data ready quickly.

“We have extremely experienced people who have been working with me for more than 20 years,” Joachimiak said. ​“We work as a team, we know the system, we have the best possible technology and the most dedicated people.”

Joachimiak’s team has also been providing proteins and crystals for other research groups at more than 20 different labs around the world, assisting those without the facilities to synthesize and crystallize proteins. The philosophy of cooperation within the Center extends outside of it as well, Joachimiak said: ​“Everything is interconnected.”

CSGID is one of only two infectious disease centers funded by NIAID through NIH, and as COVID-19 has shown, having a network of institutions ready to move at a moment’s notice to combat viral outbreaks. Satchell said the resources the center brings to the table are just as important as they were 13 years ago when it was founded, and will be vital for understanding the next outbreak when it occurs.

“We need the infrastructure for these big events,” she said. ​“We need the pre-existing genome and structural biology and antibody centers. If there’s a pandemic in the future, you will want us here.”

The U. S. Department of Energy Office of Science’s Advanced Photon Source at Argonne National Laboratory is one of the world’s most productive X-ray light source facilities. The APS provides high-brightness X-ray beams to a diverse community of researchers in materials science, chemistry, condensed matter physics, the life and environmental sciences, and applied research. These X-rays are ideally suited for explorations of materials and biological structures; elemental distribution; chemical, magnetic, electronic states; and a wide range of technologically important engineering systems from batteries to fuel injector sprays, all of which are the foundations of our nation’s economic, technological, and physical well-being. Each year, more than 5,000 researchers use the APS to produce over 2,000 publications detailing impactful discoveries, and solve more vital biological protein structures than users of any other X-ray light source research facility. APS scientists and engineers innovate technology that is at the heart of advancing accelerator and light-source operations. This includes the insertion devices that produce extreme-brightness X-rays prized by researchers, lenses that focus the X-rays down to a few nanometers, instrumentation that maximizes the way the X-rays interact with samples being studied, and software that gathers and manages the massive quantity of data resulting from discovery research at the APS.