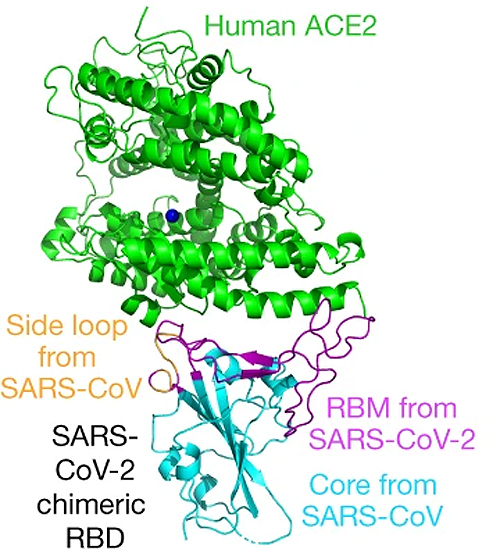 The original article by Deane Morrison was published in the University of Minnesota's Inquiry blog.

A team of University of Minnesota scientists, with critical information obtained through research at the U.S. Department of Energy’s Advanced Photon Source (APS) at Argonne National Laboratory, has laid the groundwork for designing drugs to block the novel coronavirus from attaching itself to, and infecting, human cells. The work is published in the journal Nature.

The virus, SARS-CoV-2, is closely related to the SARS virus that caused devastation in 2002–2003. The team, led by University of Minnesota researcher Fang Li, studied how mutations that changed the structure of a SARS-CoV-2 protein enabled it to attach more securely to human cells than its predecessor.

“In general, by learning what structural features of viral proteins are most important in establishing contact with human cells, we can design drugs that seek them out and block their activity—like jamming their radar,” said Li, a professor in the Department of Veterinary and Biomedical Sciences, College of Veterinary Medicine.

Researchers from the Department of Biochemistry, Molecular Biology, and Biophysics, College of Biological Sciences, were also involved in the study. Li has been leading work on the SARS-CoV-2 virus since January.

By probing the features of the SARS-CoV-2 spike protein and the receptor with x-rays at the Northeastern Collaborative Access Team 24-ID-E beamline at the APS, Li and his colleagues discovered, for the first time, that just a few mutations had made a molecular “ridge” in the spike protein more compact than a similar structure in the 2002–2003 virus. This and other changes helped SARS-CoV-2 attach more strongly to the receptor, infect human cells better, and spread faster. The APS is an Office of Science user facility at Argonne.

“Our work can guide the development of monoclonal antibodies that would act like a drug to recognize and neutralize the receptor-binding part of the spike protein,” Li said. “Or, a part of the spike protein could become the basis of a vaccine. Overall, this study can guide structure-based intervention strategies that target receptor recognition by SARS-CoV-2. This is the focus of our current work.”

Also, two coronaviruses have been isolated from pangolins—a type of scaly, anteater-like mammal—in China. The researchers analyzed the structures of their spike proteins and found that one of the pangolin viruses could recognize the human receptor well, implying that pangolins might have helped the bat virus jump to humans by acting as intermediate hosts. (Note: No live coronaviruses are used in research at the APS.)

This work was supported by National Institutes of Health (NIH) grants R01AI089728 and R01AI110700 (to F.L.) and R35GM118047 (to H.A.), The Northeastern Collaborative Access Team is funded by the National Institute of General Medical Sciences from the National Institutes of Health (P30 GM124165). The Eiger 16M detector on the 24-ID-E beam line is funded by a NIH-ORIP HEI grant (S10OD021527). We thank staff at beamline 24-ID-E for assistance in data collection. This research used resources of the Advanced Photon Source, a U.S. Department of Energy (DOE) Office of Science User Facility operated for the DOE Office of Science by Argonne National Laboratory under Contract No. DE-AC02-06CH11357.