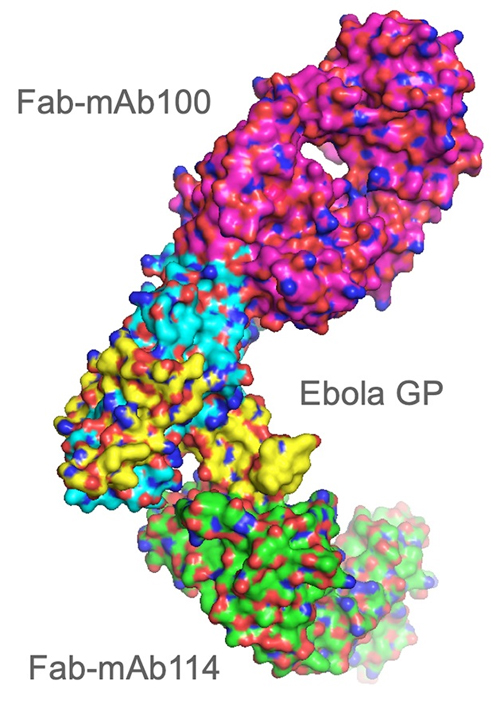 The original Argonne feature story by Christina Nunez can be read here.

Effective treatments for deadly diseases often depend on unlocking the mysteries of how proteins in our bodies behave. Research at U.S. Department of Energy’s (DOE) Argonne National Laboratory enables these insights, including one breakthrough that led to a promising drug for Ebola.

In the case of the Ebola work, a team of researchers used an SBC beamline to help show how two human antibodies were able to neutralize the virus. That original study, published in 2016 in the journal Science, contributed to the development of a drug that protects against the Ebola virus and proved remarkably effective during a recent Ebola outbreak and clinical trials in the Democratic Republic of Congo.

“Until this year, there was no really good cure for this virus,” said Andrzej Joachimiak, director of the SBC and co-director of the Center for Structural Genomics of Infectious Diseases. ​“It is a significant breakthrough.”

The Ebola virus, which causes hemorrhagic fever, on average kills about half of those who become infected according to the World Health Organization. The two antibodies studied, mAb114 and mAb100, were isolated from an Ebola survivor. The researchers examined single-crystal samples of a complex combining the Ebola protein with the protective antibodies, using X-ray diffraction data from the beamlines to construct a 3D model of the protein complex.

Each antibody was able to bind to the Ebola protein and block it from entering human cells. In recent clinical trials, patients exposed to the virus received a drug developed by the U.S. National Institute of Allergy and Infectious Diseases based on one of those antibodies, mAb114. Those patients had a 90% survival rate — almost twice the rate of previous available treatments. The drug, which has been licensed by Miami-based Ridgeback Biotherapeutics, has a Breakthrough Therapy designation from the U.S. Food and Drug Administration and is currently under expedited development. A second drug using different antibodies and developed by New York-based Regeneron Pharmaceuticals, REGN-EB3, has shown similar results.

“It’s a long process of going from the protein drug target to crystal structure to the drug,” Joachimiak said. ​“SBC is enabling that discovery process and helping to accelerate it.”

The advance is just one of many that emerge from research conducted at Argonne’s SBC. Every year, hundreds of researchers use the facility to explore a broad range of scientific inquiries, from potential treatments for diseases to bioenergy and environmental research.