A New Collider on the Horizon? 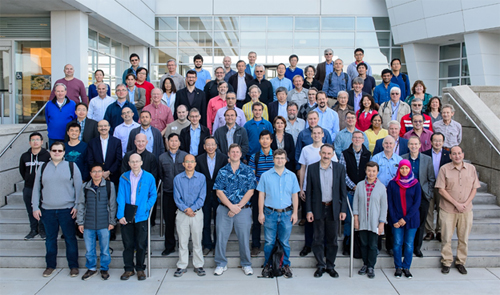 Accelerator scientists and engineers from U.S. Department of Energy (DOE) national laboratories, universities, and other research laboratories gathered for an Electron-Ion Collider (EIC) Accelerator Collaboration Meeting at the U.S. DOE’s Argonne National Laboratory Advanced Photon Source (APS) on October 9-11, 2019. The purpose at hand was to discuss the technological and design challenges common to the varied proposals for an EIC, a multi-billion-dollar accelerator project that represents the future of particle accelerators for fundamental research into the nature of matter.

In the simplest terms, an EIC is a type of particle accelerator/collider designed to collide beams of electrons and ions in order to study the properties of nuclear matter in detail via deep inelastic scattering. In the case of the US proposals, the two colliding beams will be highly polarized. In 2015, the DOE Nuclear Science Advisory Committee named the construction of an electron–ion collider one of the top priorities for the near future in nuclear physics in the United States. (https://www.phy.anl.gov/nsac-lrp/) The National Academies of Sciences, Engineering, and Medicine in a 2018 report, “An Assessment of U.S.-Based Electron Ion Collider Science,” noted that a high-energy, high-luminosity  EIC with highly-polarized electron and ion beams “would be unique to greatly further our understanding of visible matter.” According to Physics World (26 July 2018), the report called for a U.S.-led effort to “begin planning a next generation electron-ion collider to study the structure of protons and neutrons in unprecedented detail.” “The EIC will be the most challenging collider ever built in the US and will require the collaboration and accelerator expertise of the entire country to be successful,” said John Byrd, APS Accelerator Systems Division Director.

As described on the Brookhaven National Laboratory web site, the EIC “will be a discovery machine for unlocking the secrets of the ‘glue’ that binds the building blocks of visible matter in the universe.” This exciting, next-generation particle accelerator “collides electrons with protons and nuclei to produce snapshots of those particles’ internal structure—like a CT scanner for atoms. The electron beam would reveal the arrangement of the quarks and gluons that make up the protons and neutrons of nuclei. The force that holds quarks together, carried by the gluons, is the strongest force in nature. An EIC would allow us to study this ‘strong nuclear force’ and the role of gluons in the matter within and all around us.” (https://www.bnl.gov/eic/)

Across the Atlantic, the web site for CERN, the European high-energy physics lab, notes that “the versatile EIC will, for the first time, be able to systematically explore and map out the dynamical system that is the ordinary quantum chromodynamics bound state, triggering a new area of study. Just as the advent of x-ray diffraction a century ago triggered tremendous progress in visualizing and understanding the atomic and molecular structure of matter, and as the introduction of large-scale terrestrial and space-based probes in the last two to three decades led to precision observational cosmology with noteworthy findings, the EIC is foreseen to play a similarly transformative role in our understanding of the rich variety of structures at the subatomic scale.” (https://cerncourier.com/a/electron-ion-collider-on-the-horizon/)