The original Argonne press release by Savannah Mitchem can be read here.

Watch an Argonne video on this story here. 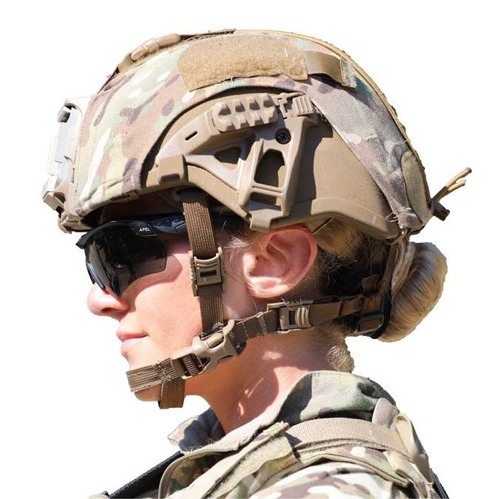 The Army Research Laboratory (ARL) recently teamed up with scientists at the U.S. Department of Energy’s (DOE) Argonne National Laboratory to look at the microstructure of the human skull using high-energy X-rays from the Advanced Photon Source (APS), a DOE Office of Science User Facility.

Better characterization of the structure of the skull and understanding of human tolerance of ballistic impact will inform computer models to help develop more effective helmets for soldiers.

Not all bones are created equal

Scientists studying skull bone are just beginning to uncover the small-scale structures within our natural helmet, the skull, and detailed X-ray characterization of the human skull at the scale of this study is unprecedented.

One of the intricacies the scientists are searching for — as it would play an integral role in helmet design — is anisotropy, or the variation of mechanical properties depending on orientation. In other words, the scientists want to uncover any patterns in the crystal structure of skull bone to see if it behaves differently if pressed — or hit — from one angle compared to another.

“Other bones in our body exhibit anisotropy,” said ARL team leader Karin Rafaels. ​“In a femur, because it is meant to be load bearing, the crystal and collagen are organized along the long direction of the leg so that it is strong along that direction. It is more brittle across the femur, which is why fractures are generally in the direction perpendicular to your leg.”

Current computer models treat skull bone as isotropic, or the same in all directions. This is a decent approximation because the skull is not meant to be load bearing, so the crystal structure is more random compared to other bones, and any patterns would be on a very small scale. But when it comes to the skull and very concentrated impact, even slight patterns on a small scale make a big difference in the mechanical properties of the skull as it withstands a load at high velocity and over a small area.

“No matter the external load on the skull, the models predict the skull to behave the same way,” said ARL engineer Andrew Brown, the lead scientist on the study. ​“Is that necessarily the case? That was my big question, because in crystallography, how random is random? Can we quantify that?”

The knowledge of the mechanical behavior of all areas of the skull could aid the computer models in determining certain pathways to stop or deflect ballistic objects that minimize injury.

“At the APS, we can see if there are preferable loading pathways, or ways to distribute or direct the force of the impact, so that we can design our helmets to take advantage of the skull’s crystal structure,” said Rafaels.

Brown brought samples of skull, preserved in saline to remain lifelike, from all parts of the head, including in and around sutures, or places where the skull bones have fused together. At the 1-ID-E beamline of the APS, they did various line scans of the samples over 90 degrees in two perpendicular planes to expose any directionality in the structure. Over a period of three days, Brown and the APS beamline scientists Peter Kenesei and Jun-Sang Park, both physicists in the X-ray Science Division, produced terabytes of data that, after analysis, could reveal anisotropy in the samples.

“Even in quick reconstructions of the data, we could already see differences between the structures of the femur compared to the skull,” Rafaels said. ​“I can’t wait to see what we find during analysis.”

To test the mechanical properties of the bone samples against their internal crystal structures, Brown plans to use a mechanical load frame at the ARL to compress the X-rayed samples along different axes while observing their behavior. He will then match up the structures with the mechanical behavior to search for trends.

“A pattern we may find is a correlation between the strength of the sample along a certain axis paired with a crystal alignment along that same axis,” Brown said.

Evolution of a fracture

For the most part, the scientists looked for structural patterns in skull samples in an uninjured state. However, some of the skull samples used in the study had pre-existing fractures from a previous ARL experiment. These specific samples gave the scientists in the current study the opportunity to see how a skull fracture — resulting from the impact of a bullet on a helmet, and then of that helmet on the skull — affected the microstructure inside the skull.

“The faster the bullet, the smaller scale the damage can be to the skull,” said Rafaels, whose background is in biomechanics. ​“The APS allowed us to see how loads are transmitted through the crystal structure and how the energy is dispersed around the fracture. The more we understand how the skull behaves, the more we can understand what happens to the brain.”

The scientists used small-angle scattering at the APS to uncover changes in the crystal structure’s periodicity due to the fractures. At the nanoscale, the crystal structure of the skull is built around flexible collagen fibers. Platelets that form the crystal are generally staggered around 67 nanometers from each other on the collagen.

“We expect to see a peak from the small-angle scattering showing approximately 67 nm spacing,” Brown said, ​“so when that spacing shifts, we know the collagen is being stretched or compressed, and we get an idea of the type of strain in the skull from the injury.”

The scientists can use this data to make a map of strain around the fracture and incorporate the information into the computational models. If the models include this behavior of the bone, they can accurately predict what kinds of fractures propagate and how, with the end goal of preventing propagation.

The team has submitted a new proposal to delve deeper into this study using the APS. Brown wants to perform in situ scattering experiments of skull bone being mechanically compressed at the beamline. The way the strain on the bone changes as a function of applied load for specimens with machined notches and specimens containing an existing fracture will provide insight into mechanical thresholds for fracture propagation.

For both the current experiment and future experiments, the scientists have enlisted much help from Jonathan Almer, APS physicist and group leader in the X-ray Science Division, and Stuart Stock, a materials scientist and faculty member of Northwestern University’s Feinberg School of Medicine. Both Almer and Stock have extensive experience imaging bone and have been publishing on the subject since 2005. Brown and Stock are spearheading data analysis, and Almer is integral to the experimental design and data collection.

“Andrew contacted the APS, and together we designed a feasible experiment, and we also brought in Stuart to collaborate,” Almer said. ​“Argonne often contributes to the user experiments in these ways, helping plan and conduct the experiment, and then linking scientists with experts in the field.”

Brown used the APS to image metals in 2014, and chose to return for its unparalleled light source and resident scientists.

“The APS is an impressive machine that a lot of experts in their fields use to contribute to all sorts of interdisciplinary research,” Brown said. ​“You can’t get this light source in a lab. It’s a very economical solution, and you’re using techniques you can’t use anywhere else.”

This study, and the studies to come, allow scientists to take a look inside the skull to reveal patterns in its architecture and the mechanisms that drive its behavior.

“Bullet to helmet to skin to skull to brain,” Rafaels said. ​“We have to get the models right all the way through — for our Army mission and for our understanding of bone in general.”