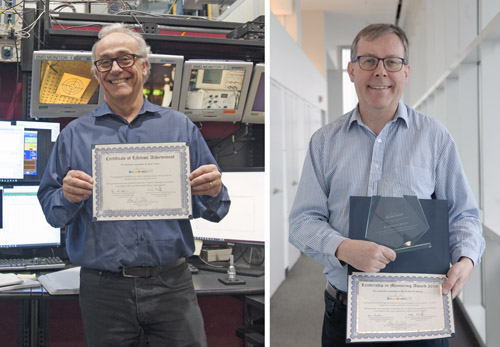 The human side of controls software was front and center at the ICALEPCS (International Conference on Accelerator and Large Experimental Physics Control Systems) 2019 conference held in October of this year. Mark Rivers (The University of Chicago/Center for Advanced Radiation Sources) received the ICALEPCS Lifetime Achievement Award, and Andrew Johnson (Advanced Photon Source Accelerator Systems Division Controls Group) was presented with the ICALEPCS Leadership in Mentoring Award.

The ICALEPCS Lifetime Achievement Award honors and celebrates an individual (or individuals) who throughout their careers have made exceptional, invaluable, and lasting contributions to the field of control systems for large experimental physics facilities. Rivers is Director of the University of Chicago Center for Advanced Radiation Sources (CARS) and Co-Director of the National Science Foundation-funded GeoSoilEnviroCARS (GSECARS) research facility at Sector 13 of the U.S. Department of Energy’s (DOE’s) Advanced Photon Source at Argonne National Laboratory. GSECARS provides high-brightness x-rays and advanced research instrumentation for earth, environmental, and planetary science investigations.

The scope of the Lifetime Achievement award reaches beyond the successful completion of a single project or even several projects. The aim is to recognize those who through their vision, leadership, technical excellence, and a willingness to think beyond a single laboratory or even a country, have influenced the international practice of control-system development.

In presenting the Lifetime Achievement award to Rivers, Karen White, Proton Power Upgrade Controls Integration Manager for the DOE’s Spallation Neutron Source at Oak Ridge National Laboratory, said of Mark, “Tonight’s winner of the ICALEPCS Lifetime Achievement Award is an extraordinary individual who brings the perspective of scientists conducting experiments to our community. He consistently looks beyond his own requirements and develops software with board applicability in a way that it can be easily adopted by others. One of his most noteworthy achievements is the development of the areaDetector software framework, originally for beamline controls and data analysis, and now extended for other purposes. This framework is used at x-ray synchrotrons as well as neutron and nuclear physics facilities around the world. Beyond the areaDetector, he is the lead developer of significant software such as asynDriver, a general-purpose tool used to interface device specific code to low level communication drivers. His software has saved other developers untold hours of work by providing reliable performance and a high level of portability. He freely shares his expertise, participates actively in our community and provides expert support to the many users of his software.”

The ICALEPCS Mentoring Award honors one (or more) practitioner(s) who, throughout his or her career, has demonstrated leadership and commitment toward attracting and nurturing talents, serving as an inspiration to new generations in the field of control and data acquisitions systems in large scientific installations. By their dedication to training and mentoring activities, they have made the ICALEPCS community grow, spreading and extending the global knowledge and teamwork across different facilities.

Johnson’s nomination for the award noted his “contribution to training, mentoring, and inspiring countless control system engineers working within the international Experimental Physics and Industrial Control System Collaboration (EPICS, the suite of software used to control many large, complex facilities, including the Advanced Photon Source electron acceleration and storage system). Johnson’s work on EPICS dates back to 1995 when he first developed and presented commercial EPICS training courses. At the Advanced Photon Source in 1999 he was lead engineer for the collaborative development of the EPICS base, responsible for merging contributed code and extensive testing of new releases, and lead developer for the initial USPAS EPICS course, continuing to update and present this week long course, offered for college credit, through 2014. For the last 19 years, he has presented in-depth training courses and targeted technical talks at EPICS Collaboration events around the world and has served as an historian for the EPICS Collaboration by maintaining an extensive website with EPICS-related information including materials presented at each collaboration meeting. His long list of relevant conference and collaboration meeting publications dates back to 1999.  Also receiving an ICALEPCS Mentoring Award was Kay-Uwe Kasemir from the Spallation Neutron Source.

The ICALEPCS is a biennial series of conferences inaugurated by a number of control system specialists from accelerator laboratories around the world. The series of conferences is intended to, among other things, facilitate the interchange of ideas and information between control system specialists working on large experimental physics facilities around the world (accelerators, particle detectors, tokamaks, telescopes, etc.). The term "control systems" in ICALEPCS is broadly interpreted to include all components or functions, such as processors, interfaces, field-busses, networks, human interfaces, system and application software, algorithms, architectures, databases, etc.; and all aspects of these components, including engineering, execution methodologies, project management, costs, etc.