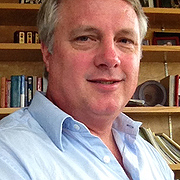 John’s accomplishments and research history make clear that he is an outstanding choice to lead ASD in maintaining the excellent operation of the U.S. Department of Energy’s (DOE’s) APS, and to push forward the research and development that will keep the APS at the cutting edge of synchrotron x-ray science while positioning the APS Upgrade for the best possible performance.

“I am honored to join the team at the crown jewel of light sources and very excited to help keep the APS at the forefront of x-ray science with a new machine,” Byrd said.

John earned his B.A. in Engineering Physics from the University of Arizona, (Tau Beta Pi and Bard Scholar); and his M.S. in Physics and Ph.D. in Accelerator Physics from Cornell University. He has been a Senior Staff Scientist at the DOE’s Lawrence Berkeley National Laboratory (LBNL) since 2009. He is currently the Program Head of the Center for Beam Physics (CBP) at LBNL, a position he has held since 2011, while serving concurrently as Group Leader of the CBP Beam Technology Group since 2003. He was an Assistant Adjunct Professor in the Department of Physics of the University of California, Davis; Deputy Group Leader of the Advanced Light Source (ALS) Accelerator Physics Group at LBNL; Staff Scientist in the ALS Accelerator Physics Group; and Scientist at the CBP.

John is a Fellow of the American Physical Society (2012) and recipient of the US Particle Accelerator School Iron Man Award (2016). He has also served as a member-at-large on the American Physical Society Division of Physics of Beams Executive Committee. John is the author or co-author of more than 200 peer-reviewed journal and conference proceedings articles. John’s extensive and wide-ranging research interests include design of high-energy accelerators and next-generation synchrotron radiation sources; femtosecond timing and synchronization; high-current storage rings; accelerator-based sources of terahertz radiation; collective instabilities in accelerators; accelerator instrumentation and diagnostics; radiofrequency and microwave systems; and longitudinal beam dynamics.